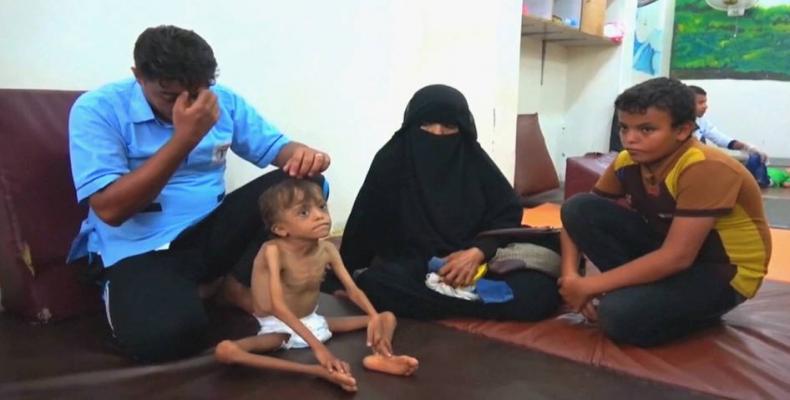 Sanaa, November 17 (RHC)-- A prominent international charity group says an estimated 130 children or more are losing their lives every day in Yemen due to “extreme hunger and disease,” warning the situation will deteriorate unless a crippling blockade imposed on the impoverished nation by a Saudi-led military coalition is lifted immediately.

“Without urgent, unhindered access for humanitarian organizations and an increase in funding, Save the Children is warning half of these children will most likely go without treatment,” said the UK-based group in a report, warning that “if left untreated, approximately 20-30 percent of children with severe acute malnutrition will die each year.”

The warning came less than two weeks after Saudi Arabia announced that it was shutting down Yemen’s air, sea, and land borders.  “The decision to block access entirely to the key entry points of Sana’a Airport and the ports of Hudaydah and Salif puts thousands more children at risk,” the charity agency added, predicting that each of the provinces of Hudaydah and Ta'izz -- the most affected regions by the ongoing “hunger crisis” -- would lose a staggering 10,000 children by the end of this year.

“These deaths are as senseless as they are preventable.  They mean more than a hundred mothers grieving for the death of a child, day after day,” said Tamer Kirolos, Save the Children’s Yemen Country Director.

Meanwhile, three of the United Nations agencies -- the World Food Program, UNICEF and the World Health Organization -- in a statement made a fresh plea for the Saudi war machine to remove its blockade on the impoverished nation, warning that without aid shipments “untold thousands of innocent victims, among them many children, will die.”

They further warned that even if the blockade is only partially removed, an additional 3.2 million people would be pushed into hunger.  The three UN agencies also said that one million children are at risk from a fast-growing diphtheria outbreak.  And the United Nations warns that Yemeni hospitals’ will run out of fuel within three weeks unless Saudi Arabia removes its blockade.

Latest figures show that the war has so far killed over 12,000 Yemenis.  The military campaign has also taken a heavy toll on the country's facilities and infrastructure, destroying many hospitals, schools, and factories.

Saudi Arabia has also imposed a total embargo on Yemen, causing severe food and medicine shortages and a cholera epidemic that has so far claimed the lives of nearly 2,200 people.  After nearly three years of the imposed war, the impoverished nation has seven million people on the verge of famine and has had 900,000 suspected cholera cases in the past six months.