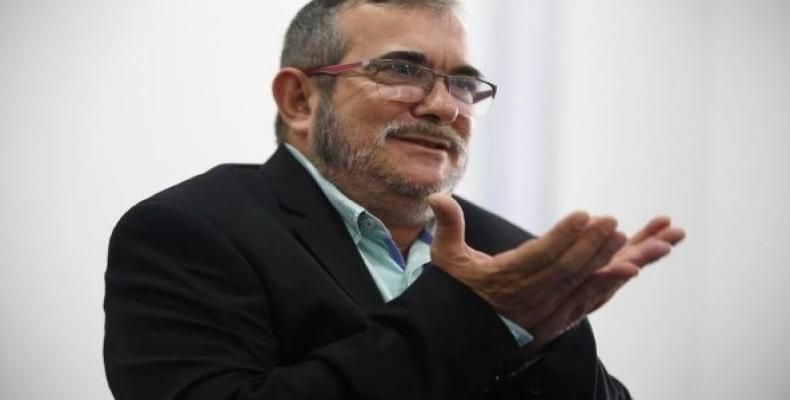 Bogota, November 22 (RHC)-- Rodrigo Londoño, or "Timochenko," presidential candidate for Colombia's Revolutionary Alternative Forces of the Commons, FARC, has penned a letter to U.N. Secretary-General Antonio Guterres to express concerns over the Colombian government's compliance breaches in relation to the peace agreement.

In his letter, the FARC leader warned of unjustified delays pertaining to the reincorporation of former guerrilla fighters, as well as unmet congressional and Special Jurisdiction of Peace obligations that are detailed in the peace accord, according to Cubadebate.

He noted that his concerns have been corroborated by U.N. unease with the way the Colombian government has handled its end of the peace bargain.  “The status of the reincorporation of FARC members,” Timochenko wrote, “the security situation in the former conflict zones and the legal uncertainties for members of the FARC, as a result of delays in the approval of key legislation on political participation, as well as judicial review in progress” have not been met by the government.

He also warned that Constitutional Court rulings introduce modifications that go against the grain of the peace accord. "While it is true that the ruling of the Court enables the political participation of ex-combatants in general terms, it introduces a series of conditions not foreseen in the Final Agreement,” Timochenko stressed. He noted that “non-compliance” to the new terms “would result in the forfeit of special treatment, benefits, waivers, rights and guarantees, as the case may be."

In September, Timochenko wrote an open letter saying the Colombian government has spared no effort to subject legislative reforms necessary for the peace deal's implementation to “serious institutional mutilations” while effectively shielding paramilitaries from being investigated and rooted out.

The killings of social movement leaders and people's representatives have continued unabated on a near-daily basis, he noted, while the Colombian National Police mobile riot squad, or ESMAD, continues to repress poor communities.  In addition, since the peace accords were signed, paramilitaries have sought to gain control of strategic areas abandoned by the FARC. "The reconciliation we dreamed of is being stranded, pushed down by those committed to denying us a space in Colombia.”