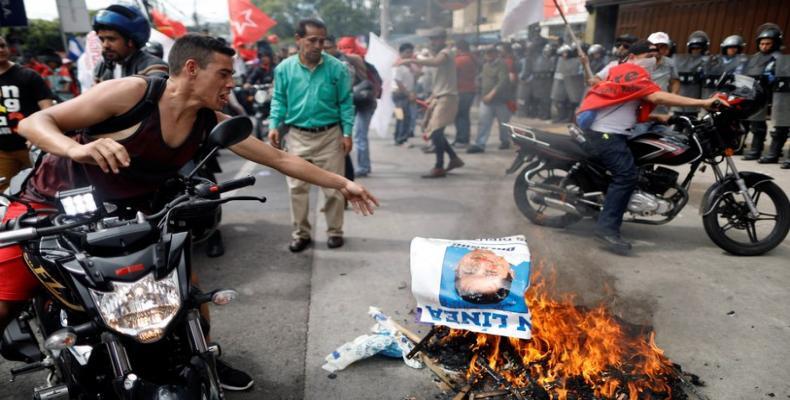 Tegucigalpa, December 4 (RHC)-- Protests continue throughout Honduras as the Supreme Electoral Tribunal released what is said to be the first official results of last week's presidential elections.

According to the results issued by the electoral body early Monday morning, the incumbent president's National Party obtained 42.98 percent of the votes, while the Opposition Alliance received 41.39 percent, with 14 voting tables still to be counted.  The TSE said there was a 53 percent participation, representing more than 3,800,000 voters.

Meanwhile, opposition candidate Salvador Nasralla has confirmed a telephone conversation with Supreme Electoral Tribunal official Marco Ramiro Lobo, where he confirmed a victory for the alliance.  According to a post on Nasralla's Facebook page: "The illegal and unjust curfew is nothing more than a coup against the votes of the people who do not want the current president.”

Despite the government imposed 10-day curfew and suspension of constitutional right, demonstrations took place around the country to defend preliminary election results which showed opposition candidate, Salvador Nasralla, with a comfortable lead over the right-wing incumbent president Juan Orlando Hernandez.

Three people – including a teen-aged girl – have so far been killed in violent clashes following the disputed elections, as the armed forces opened fire on unarmed opposition supporters.