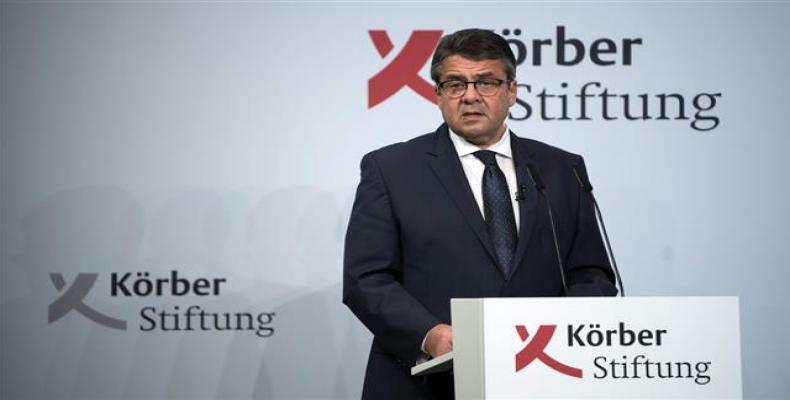 Berlin, December 7 (RHC)-- German Foreign Minister Sigmar Gabriel says the world order is changing and the era of American dominance is gradually fading away under U.S. President Donald Trump’s administration, asserting that Berlin has to defend its interests even through standing up to Washington.

“The global dominance of the United States is slowly becoming history,” the German top diplomat said in a speech he delivered at the Berlin Foreign Policy Forum.  Gabriel further noted that the “withdrawal of the United States under Donald Trump from its reliable role as a guarantor of Western-led multi-lateralism accelerates a change of the world order with immediate consequences for German and European interests.”

The German foreign minister advised the German leaders that the European country can no longer “simply react to U.S. policy, and that Berlin must create its own position.  He added that even after Donald Trump leaves the White House, Washington-Berlin relations would never be the same.  The U.S. “no longer sees the world as a global community, but as a fighting arena where everyone has to seek their own advantage,” Gabriel added, urging the European Union member states to further strengthen the bloc as the U.S. withdraws from the international stage.  “We have to describe our own positions and, if necessary, draw red lines” which would be “based on our own interests,” he went on to say.

Elsewhere in his remarks, Gabriel touched upon the issue of controversial moves by Washington, including a raft of embargoes it imposed on Russia which threaten European energy companies.  He also expressed his concern that under Trump, Iran’s nuclear deal – dubbed the “worst deal ever negotiated” by the American president – collapses.

Since entering the White House in January, Trump has unsettled Germans by criticizing Germany’s trade surplus and its contributions to the North Atlantic Treaty Organization (NATO).  Furthermore, Trump has irritated Berlin with his decision to pull out of the globally-approved Paris climate accord and his refusal to certify — under a domestic U.S. law — Iran’s commitment to the 2015 international nuclear agreement.  Germany is a party to that deal, and Iran’s compliance has been verified by the official institution in charge of verification, namely the International Atomic Energy Agency.