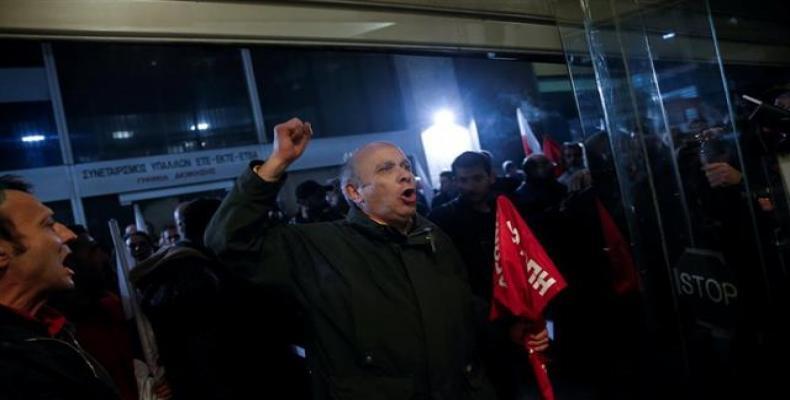 Athens, January 10 (RHC)-- Demonstrators with Greek Communist-affiliated trade union group PAME stormed into the labor ministry on Tuesday protesting over new labor reforms demanded by the country's foreign creditors.  They made it to the eighth floor of the building where some entered the office of Labor Minister Effie Achtsioglou, shouting "shame on you" at her.  About 500 protesters had rallied outside the labor ministry, putting up a banner reading "Ministry of EU and IMF!" and chanting "We won't yield to plutocracy!"

The European Union and International Monetary Fund have bailed Greece out from becoming bankrupt due to oppressive debt, but demanded severe austerity in exchange.  Part of that has been changes to the labor law.  The demonstrators damaged the metal shutters at the main gate and smashed some windows at the ministry's entrance, a Reuters witness said.

More protesters arrived as a group unfurled a huge banner that read "Hands off strikes, it's a labor right!" hanging it from the roof of the ministry on a busy street in central Athens.  Greece's government was due to submit a bill with bailout-mandated reforms to parliament on Tuesday.  The government has agreed to increase the quorum for first-degree unions to vote on a strike.

Lawmakers are expected to vote on the reforms before a meeting of euro zone finance ministers on January 22nd, which will assess the country's bailout progress as part of a review by its lenders.