Venezuela Dialogue on Hold, Government Accuses the Opposition of Yielding to External Pressures 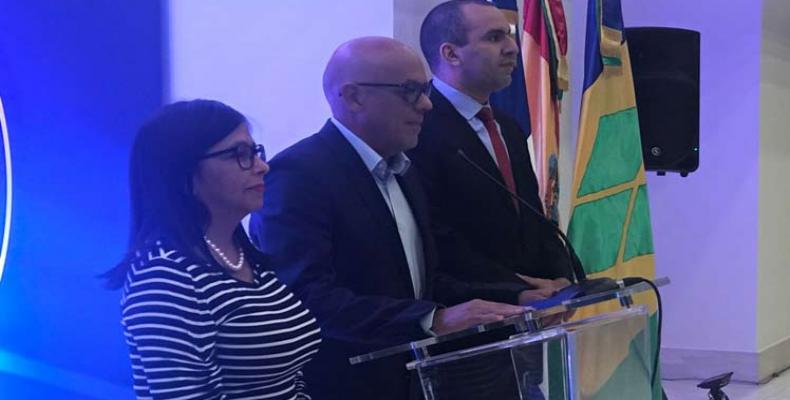 Santo Domingo, January 19 (RHC) The Venezuelan opposition has yielded to external pressures, and did not participate in the talks scheduled to take place in the Dominican Republic, said the Minister for Communication of Venezuela, Jorge Rodríguez.

In statements to the press Thursday after concluding a meeting with the companions in the negotiation process, Rodriguez said that the pressures come from the U.S. government, Mariano Rajoy, and Juan Manuel Santos who do not want the opposition to participate in the elections.

The minister explained that during a meeting with the opposition held in Caracas on Wednesday to finalize details of the agreement, everything seemed to be fine and thy said their delegation was willing to be present  in Santo Domingo.

However, Rodriguez said the delegation did not come to Santo Domingo, resorting to futile excuses.

He said that the reasons given by the opposition to be absent from the meeting had to do with the dismantling this week of one of the most dangerous terrorist cells ever seen in Venezuela, which executed and planned to execute actions, including an attempt to kill president Nicolas Maduro.

He pointed out that the Venezuelan Minister of the Interior, Justice and Peace, Néstor Reverol, never said that the information provided that led to the terrorist cell was obtained from participants in the dialogue, although he did say that it was acquired from opponents.

Finally, he ratified that the Venezuelan government´s commitmet to continue the dialogue with the opposition despite delays and excuses.

Also speaking with the press were the Dominican Foreign Minister, Miguel Vargas, and the former president of the Spanish government, José Luis Rodríguez Zapatero. They said that after talking with the parties and the accompanying foreign ministers, they have agreed to convene a new date for the continuation of the dialogue, to be announced shortly.

“We are committed to the dialogue as  an expression of solidarity with the Venezuelan people. We have an obligation, a duty , and coexistence can only be linked to an agreement, and that is why we are not giving up because we believe in peace and coexistence,” Zapatero said.