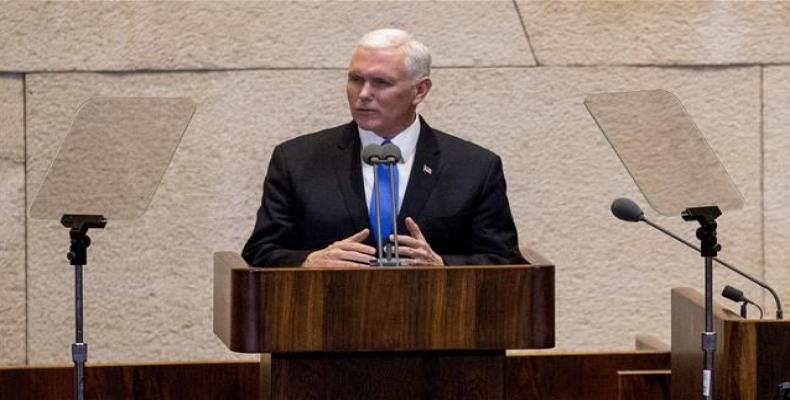 Tel Aviv, January 23 (RHC)-- The United States will open its embassy in Jerusalem next year, Vice President Pence said Monday, accelerating plans that have sparked fury from Palestinians and widespread condemnation in the region.  Speaking in Israel’s parliament, or Knesset, Pence looked notably more at ease than during earlier meetings in Egypt and Jordan, where he has been forced to defend the controversial decision to recognize Jerusalem as Israel’s capital.

In Tel Aviv, Pence voiced his wholehearted support for Israel.  "Jerusalem is Israel’s capital — and, as such, President Trump has directed the State Department to immediately begin preparations to move the United States embassy from Tel Aviv to Jerusalem," Pence said to applause.  "In the weeks ahead, our administration will advance its plan to open the U.S. Embassy in Jerusalem — and that United States embassy will open before the end of next year."  When President Trump announced the decision in December, U.S. officials indicated that it may take three or four years to move the embassy.

Israeli Arab lawmakers staged a walkout at the beginning of Pence’s speech, resulting in a small scuffle.  One held up a sign reading “Jerusalem is the capital of Palestine” in Arabic and English, before being pushed out of the chamber by security.

Palestinian officials also snubbed his visit.  Palestinian Authority President Mahmoud Abbas on Monday was instead visiting Brussels, where he urged members of the European Union to recognize a Palestinian state along 1967 borders.  Abbas described the E.U. as the “main partner” for building a Palestinian state.

The decision to speed up the embassy move is likely to further rankle Palestinians, who consider East Jerusalem as the capital of their future state and say that Trump’s presidency has been defined by threats on their side, but incentives and rewards for Israel.  Pence, an evangelical Christian, was a driving force behind the administration’s decision on Jerusalem and flanked Trump as he made the announcement.  In his own past statements, he has gone further than Trump, describing Jerusalem as Israel’s undivided capital.

“The messianic discourse of Pence is a gift to extremists and has proven that the U.S. administration is part of the problem rather than the solution,” said the Palestinian Authority’s chief negotiator, Saeb Erekat. “His message to the rest of the world is clear: Violate international law and resolutions, and the U.S. will reward you,” he said.

After Trump formally recognized Jerusalem as Israel’s capital in December, the State Department began looking for a possible site on which to build an embassy to replace the existing one in Tel Aviv.  Nearly every country that has diplomatic relations with Israel is based in Tel Aviv on the principle that Jerusalem’s status should be decided in negotiations with the Palestinians, who desire East Jerusalem as their capital.

Secretary of State Rex Tillerson had said construction could take several years, because of security requirements put in place after the 1998 bombings of U.S. embassies in Kenya and Tanzania.  Now, Embassy buildings must be set back at least 100 feet from the street as protection against truck bombs. Consequently, many new missions are built far from the center of congested capitals.

“The secretary and the vice president are on the same page regarding the importance of security,” said Steven Goldstein, undersecretary of state for public diplomacy and public affairs.  “I wouldn't expect any announcement to suggest security elements will be rushed.”

For weeks, the administration weighed whether to build an entirely new embassy, which could take as long as a decade and be very expensive, or whether to retrofit one of the consulate buildings in Jerusalem, at least temporarily.  The current U.S. consular services building in the Arnona neighborhood of Jerusalem straddles the “green line” that marked Israel’s pre-1967 border and what was then a demilitarized zone.

According to a person close to the administration who spoke anonymously to discuss private deliberations, the focus recently was on how much time it would take to retrofit an existing building permanently so that the embassy could be moved more quickly.  One faction believed that the construction would take until next year to complete.  Another, which included presidential adviser Jared Kushner and the U.S. ambassador to Israel, David Friedman, pushed for it to be done before the end of 2018.

Trump appeared to be comfortable with a timetable stretching into 2019 and as recently as Friday, a senior State Department official told reporters that designing and building a permanent embassy would be “a matter of years, and not weeks or months,” though the official acknowledged that an “interim” facility was being considered.  The official said the decision was Tillerson’s to make, and he had not done so yet.

It was unclear why the time frame has changed so suddenly, and why the announcement was made by Pence, not Tillerson.  In general, however, the White House has assumed responsibility for trying to resume peace talks between Israelis and Palestinians.

Aaron David Miller, a Middle East analyst who was a negotiator during both Republican and Democratic administrations, said the announcement suggests the administration plans to convert the U.S. consular building in the Arnona neighborhood to an embassy.

"The fact that Pence talked about next year can only mean one thing in the president's 'I deliver' world — that they're not going to wait but likely deliver the Arnona site as the embassy," he said.  "No billion-dollar, six-year project in Trumpland."