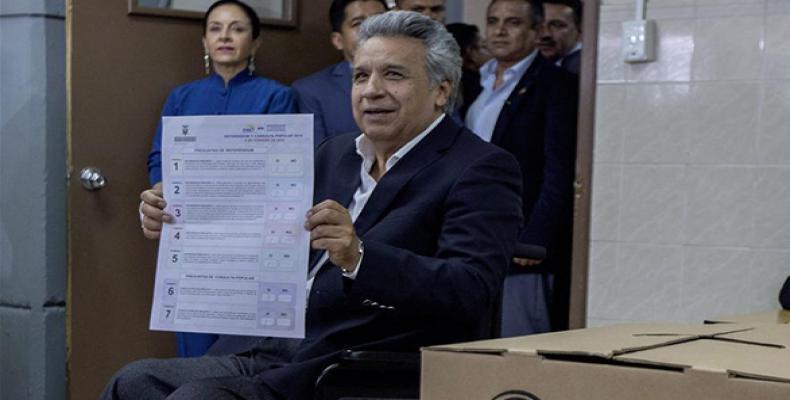 Quito, February 5, (RHC)— Ecuador's National Electoral Council (CNE) announced the "yes" is leading in a quick recount, with 67.82% of the votes in the seven questions of the popular survey and referendum held Sunday.

More than 13 million Ecuadorians, including some 40,000 living abroad, were expected to participate in the consultation.

According to the president of the national electoral authority, Nubia Villacís, the question that obtained the most support in the preliminary results, with 74%, was number one, which indicates that those who have been sentenced for corruption are disqualified from participating in political life and their property should be confiscated, the Spanish news agency EFE reported.

The question in which the "yes” obtained less support, with 63% of the votes  was number three. It seeks to repeal the indefinite re-election of authorities.

The results revealed by Villacís correspond to 1,885 of the 2,121 polling stations.

The National Electoral Authority has a term of ten days to release the final reports, said Xinhua news agency.

Reacting to the announcement, Ecuadoran president Lenin Moreno said, without mentioning the name of any politician in particular, that those who were willing to be eternal in the political scene will no longer return and that they have the obligation to renew themselves.

"Thank you for fighting against corruption, no more corrupt policies, thanks for encouraging our young people to participate in politics," the president also said in reference to the number one question of the referendum, aimed at fighting corruption.

Moreno also thanked the CNE officials, the Armed Forces, the international observers, especially the OAS and UNASUR, and all citizens for having participated in the process.

"The consultation was the result of a broad process of dialogue and today we have the answer," he said, and added that Ecuadoreans are obliged to fulfill this mandate without any delay and said that within the next 30 days the National Parliament will begin the process of implementing the results of the referendum.