U.S. B-52 Bomber Drops Record Number of Bombs on Afghanistan 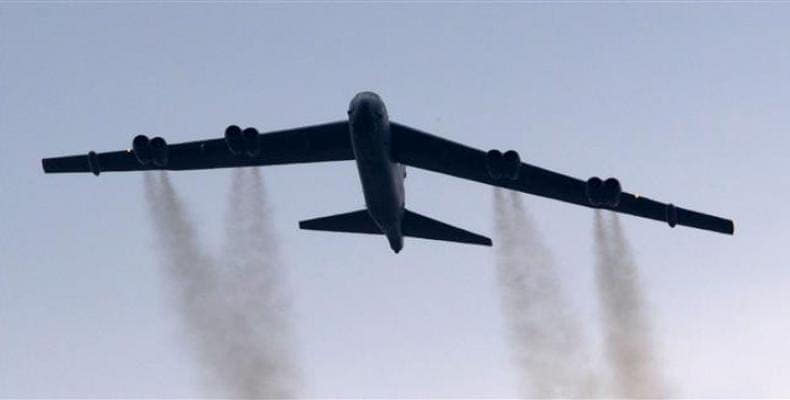 Washington, February 7 (RHC)-- A U.S. Air Force B-52 Stratofortress long-range bomber has dropped a record number of precision guided bombs on alleged Taliban targets across Northern Afghanistan, the U.S. Forces-Afghanistan says.  Announcing the airstrike in a statement issued in Washington, the force said the aircraft had dropped at least 24 guided munitions during the past 48 hours.

The B-52’s mission was part of a 96-hour operation that saw USAF aircraft struck what the force said were Taliban training bases and revenue sources, including narcotics laboratories.  "During these strikes, a US Air Force B-52 Stratofortress dropped 24 precision guided munitions on Taliban fighting positions, setting a record of the most guided munitions ever dropped from a B-52," the statement read.

Among the targets there were several stolen Afghan National Army vehicles that had been “converted to vehicle-borne” improvised explosive devices (IEDs), the statement added.  Western contractors say U.S. troops began the drawdown over the past week, with groups of soldiers leaving the base on daily flights.

“The Taliban have nowhere to hide,” said General John Nicholson, commander of the American forces in the war-torn country. “There will be no safe haven for any terrorist group bent on bringing harm and destruction to this country.”

The bomber had recently been reconfigured with a conventional rotary launcher (CRL), which allows the 1960s-era aircraft drop conventional, precision-guided weapons from its bomb bay.

The bombing comes amid reports that Washington is stepping up military engagement in Afghanistan by removing its troops from Iraq and redeploying them to Afghanistan.  U.S. President Donald Trump has openly expressed his desire to expand the US military buildup in Afghanistan, contrary to his campaign promises to end the years-long occupation that not only has failed to defeat Taliban but has given rise to Daesh-linked groups in the country.