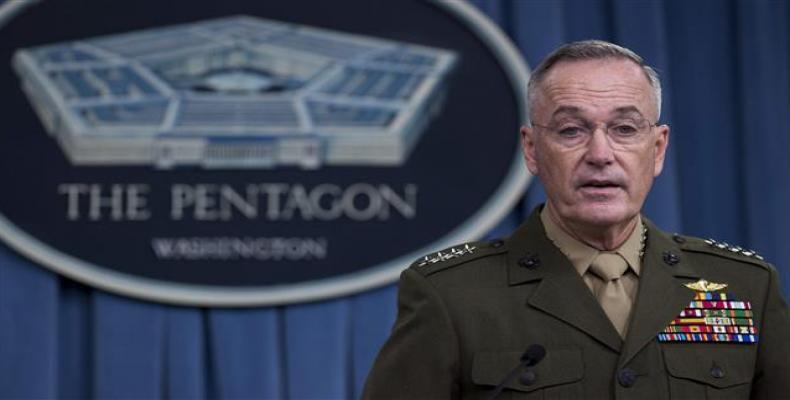 Sydney, Feb 8 (RHC)-- A top American military officer, Marine General Joseph Dunford, has warned that any war between the United States and North Korea would be -- in his words -- "nasty."  Dunford, who is the chairman of the Joint Chiefs of Staff, made the remarks after he visited U.S. Marines temporarily deployed to an Australian air force base in Darwin.

The Marine general told reporters travelling with him that the U.S. military exhibits its warfighting capabilities in order to get a peaceful solution to the North Korean crisis.  "Right now, the military dimension of the problem is reinforcing Secretary (of State Rex) Tillerson's economic and diplomatic pressure campaign," he said. "His diplomatic efforts are underwritten by a credible military strength."

When a Marine asked that in the event of war how the Pentagon would avoid the high casualty rates that were incurred during the Korean War of 1950-53, Dunford said: “We're obviously a different force than we were even 10 years ago.”  He added: "But at the end of the day it will be a nasty war if we fight on the Korean Peninsula and it's going to involve Marines and soldiers taking ground, alongside obviously our allies and partners.”

"If you are a Marine, and frankly if you are anybody in uniform, if you wake up in the morning always believing that this is the last day that you will be at peace, you are going to be in the right place," he continued.  "The last thing you want to do when you are in uniform is to be complacent and to think, nah, we are never going to go to war,” said Dunford, who was head of the Marine Corps before becoming chairman of the Joint Chiefs.

North Korea has been under a raft of harsh UN sanctions since 2006 over its nuclear tests as well as multiple rocket and missile launches. Pyongyang has firmly defended its military program as a deterrent against the hostile policies of the U.S. and its regional allies, including South Korea and Japan.