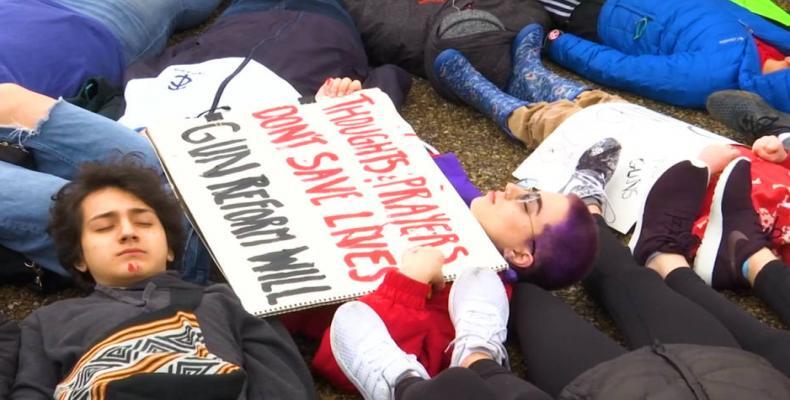 Miami, Feb 21 (RHC)-- In the U.S. state of Florida, 100 students from Marjory Stoneman Douglas High School are on a two-day, 400-mile bus trip to the Capitol in Tallahassee to demand action from lawmakers on gun control, after 17 people were killed in a shooting massacre at their high school last week.

Student Cameron Kasky speaking outside her high school in Parkland said: “It’s not our job to tell you, Senator Marco Rubio, how to protect us. The fact that we even have to do this is appalling.  Our job is to go to school, learn and not take a bullet.  You need to figure this out. That’s why you were, unfortunately, elected.  Your job is to protect us, and our blood is on your hands.”

In Washington, D.C., dozens of students lay down in front of the White House for three minutes on Monday in a protest symbolizing how it only took the white former student, 19-year-old Nikolas Cruz, three minutes to kill 17 people with his AR-15.  The demonstration originally called for 17 students to lie down -- to symbolize those killed -- but once the “lie-in” started, many more students and adults joined them.