Hundreds of thousands march across the U.S. to demand gun controls 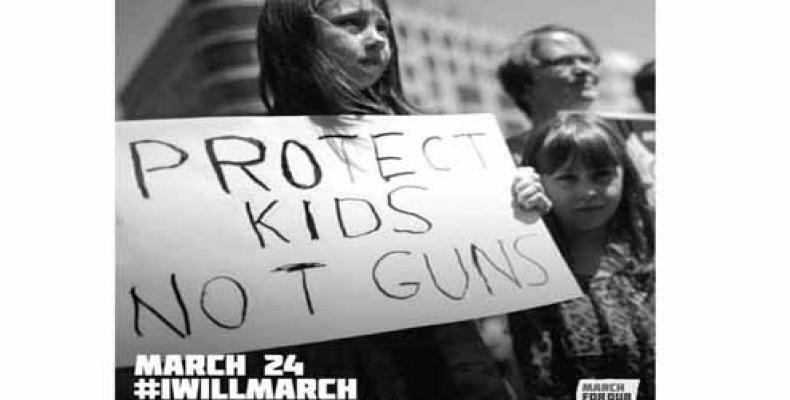 Washington, March 26 (RHC)-- Thousands of students, teachers and supporters held marches over the weekend across the United States to break the legislative efforts to restrict firearms in a nation where mass shootings have become frighteningly common.

While the focal point was the 'March for Our Lives' rally in Washington DC, organized by survivors of the February 14th shooting that left 17 people dead at a Florida high school, protesters also turned out in New York, Boston, Los Angeles, Chicago, Houston and Minneapolis.

Many of the participants said they were motivated by dread and anxiety that they could be next.

At the 'March for Our Lives' rally Saturday in the nation's capital, protesters carried signs, chanted and demanded action against gun violence. It is already regarded as the biggest single-day protest in D.C.'s history, attended by some 200,000 demonstrators, according to press releases.

The White House praised the demonstrators for exercising their right to free speech, but Donald Trump remained silent, with critics saying he instead spent much of the day at his golf club in Florida.

Barack Obama, however resorted to social media. He tweeted: “Michelle and I are so inspired by all the young people who made today’s marches happen. Keep at it. You’re leading us forward.”

Rock singer Cathy Richardson described the energy emanating from the crowd as reminiscent of the anti-Vietnam War protests. And former Secretary of State John Kerry said he saw parallels between the Parkland survivors and “many of the Vietnam veterans who returned home and felt compelled to speak out about their experience.”

“Every historic moment has its own power, and these young people deserve their own moment,” Kerry said.

Kerry, who is 74, became an antiwar activist after volunteering as a Naval officer in Vietnam, an experience that reportedly shaped his worldview and his service as Senator and later government official.

The march in Washington on Saturday mixed political activism with the raw emotion of teenagers who are dealing with the murder of their friends under the glare of the national spotlight, which in this era means nasty criticism from trolls on the Internet.

Beyond the United States – where about 800 such protest actions took place– there were protests also in London, Belfast, Geneva and a number of other cities across the globe.