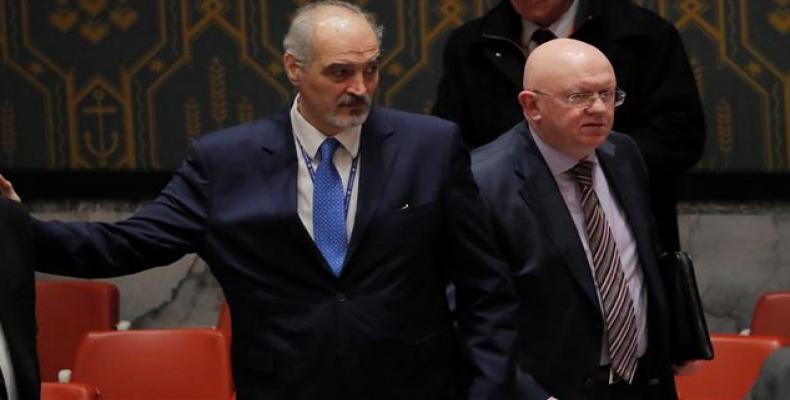 United Nations, April 18 (RHC)-- Russia has said that there is no need for establishing a new inquiry into chemical weapons use in Syria as Washington and its allies have already taken up the role of judge and executioner.

Russian UN Ambassador Vassily Nebenzia made the remarks on Tuesday while addressing the Security Council which has been deadlocked over establishing a joint United Nations and Organization for the Prohibition of Chemical Weapons (OPCW) inquiry which ended in November.

"The idea of creating a mechanism on attributing responsibility for the use of chemical weapons no longer makes any sense when Washington and its allies have already determined who's guilty and in essence are already acting like self-appointed executioners," said Nebenzia.

In the early hours of Saturday, the U.S., Britain and France launched a barrage of missile attacks against Syria in response to what they claim to have been a chemical attack by the Syrian government in Douma.

Syria rejected the accusations as “chemical fabrications” made by the foreign-backed terrorists in the country in a bid to halt advances by pro-government forces.

Initial talks were held on Monday over the adoption of a draft resolution forwarded by France, the United States and Britain.  Last week, rivaling U.S. and Russia drafted UNSC resolutions aimed at creating a new inquiry into chemical weapons attacks in Syria have both failed to garner votes at the UN Security Council.

Meanwhile, Syrian's UN envoy Bashar al-Ja’afari has announced that United Nations security team traveled to the Syrian town of Douma on Tuesday ahead of a planned visit by international chemical weapons experts on Wednesday.

"Today the UN security team entered Douma ... in order to assess the security situation on the ground and if this United Nations security team decided that the situation is sound in Douma then the fact-finding mission will begin its work in Douma tomorrow," said Ja'afari.

"The Syrian government did all that it can do to facilitate the work of this mission," he added.  Earlier in the day, Syrian state media reported that special investigators of the Organization for the Prohibition of Chemical Weapons (OPCW) had arrived in Douma.