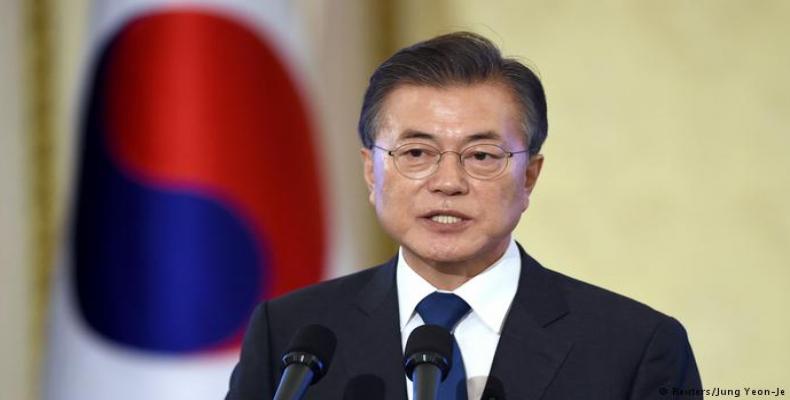 Seoul, April 19 (RHC)-- South Korea´s president Moon Jae-in has accepted North Korea´s request of a signing of a formal peace treaty to replace the current truce that currently governs the relations between the two countries after the end of the Korean peninsula conflict in 1953.

Moon is expected to meet his North Korean counterpart Kim Jong-un next week in the uninhabited village of Panmunjom, inside the demilitarized zone.

“Only a few months ago the shadow of war was glimpsed over the Korean peninsula, as military tensions were on the rise”, said Moon in remarks to the press.

He added that the 65-year old armistice has been in place for too long and must come to an end and advocated not to repeat the mistakes of the past.

According to Chung Eui-yong, head of South Korea’s presidential national security office, Seoul and Washington were exploring several ways in which to reward the North for agreeing to its complete and verifiable denuclearisation.

may seek to replace its uneasy truce with North Korea with a formal peace treaty, according to officials in Seoul, as the country’s president,

The officials added, however, that negotiating a peace treaty to replace the armistice agreed by the two Koreas at the end of their 1950-53 war would be contingent on Pyongyang abandoning its nuclear ambitions.