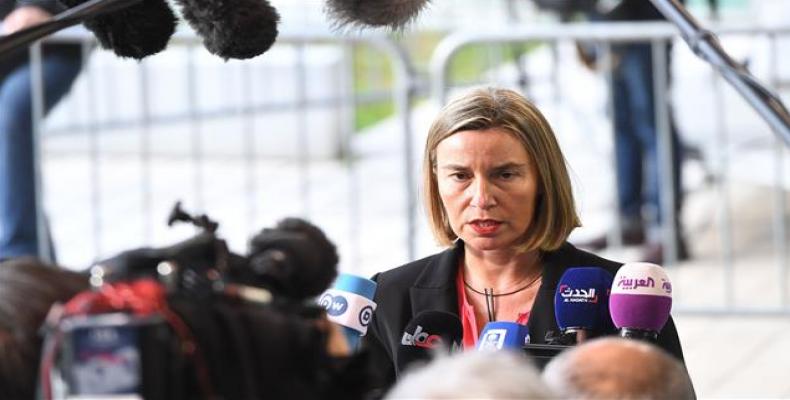 Luxembourg, May 10 (RHC)-- The European Union (EU)'s foreign policy chief has reiterated its support for the 2015 nuclear deal Iran, saying it "regrets" U.S. President Donald Trump's decision on Tuesday to withdraw his country from the agreement.  "The JCPOA, unanimously endorsed by UN Security Council Resolution 2231, is a key element of the global nuclear non-proliferation architecture and is crucial for the security of the region," Federica Mogherini said in a statement on Wednesday, using an acronym for the deal, known as the Joint Comprehensive Plan of Action.

"As long as Iran continues to implement its nuclear related commitments, as it has been doing so far and has been confirmed by the International Atomic Energy Agency in 10 consecutive reports, the EU will remain committed to the continued full and effective implementation of the nuclear deal," the statement added.

The JCPOA came out of years of negotiations between Iran on one side and six world powers, namely the US, Russia, China, Germany, France and Britain, on the other, in July 2015.  After criticizing the agreement for months, Trump on Tuesday officially declared that his country is pulling out of the JCPOA, saying Washington will not only reinstate the anti-Iran sanctions that were lifted as part of the deal, but will also “be instituting the highest level of economic” bans against the Islamic Republic.

Mogherini said the EU did not support Trump's decision to reinstate the bans and would work instead to make sure Iranian and European businesses can enjoy the freedoms provided under the JCPOA.  "The lifting of nuclear related sanctions is an essential part of the agreement. The EU has repeatedly stressed that the sanctions lifting has a positive impact on trade and economic relations with Iran. The EU stresses its commitment to ensuring that this can continue to be delivered," she added.

Hailing the deal as "the culmination of 12 years of diplomacy," Mogherini said the accord was working and the EU was determined to preserve it.

Trump made the decision despite numerous reports by the International Atomic Energy Agency (IAEA) that confirm Iran's compliance to the landmark agreement.
Shortly after Trump's announcement that the U.S. was pulling out of the Iran nuclear deal, the three European nations also party to it – Germany, France and the UK – issued a a joint statement stressing that they will continue to honor it anyway.

The statement by Germany, France and the UK expressed "regret and concern" and called the agreement important for their shared security.