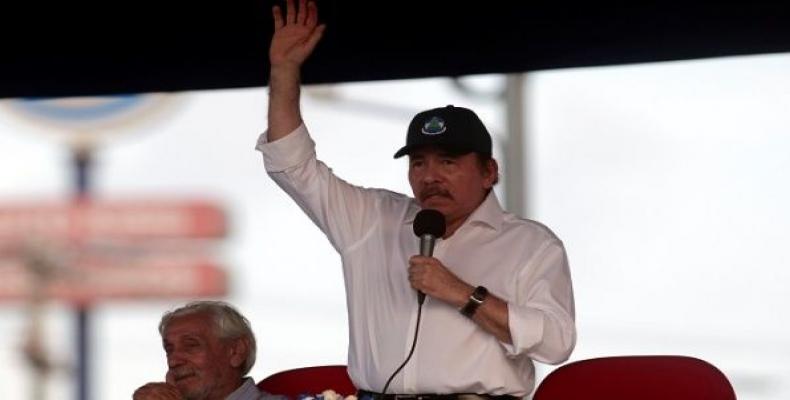 Managua, May 17 (RHC)-- Nicaraguan President Daniel Ortega has kicked off the dialogue for peace in an attempt to bring an end to the recent unrest and clashes between security forces and demonstrators that have left dead and injured in the Central American country.

“We all suffer the death of our loved ones, but we have the obligation not to respond to violence with more violence, because that could end in war, and the people are tired of that," President Ortega said.  "Violence is what is being exercised right now, frightening families."  He stressed that the police are ordered not to shoot since "you can not continue to shed the blood of brothers."

"The proof is that when the Masaya barracks was attacked, the police resisted for hours and hours and did not shoot," Ortega said.  A day earlier the country's Vice President Rosario Murillo had confirmed the beginning of the talks and the presence of Ortega.  The vice president said it's necessary to take part in the talks with goodwill, and hopes the dialogue be “the door and path” for “peace and hope.”

The government, students and civil society and private sectors representatives, including the Private Enterprise Superior Council (Cosep), the American Chamber of Commerce (Amcham) and the Nicaraguan Foundation for Economic and Social Development (Funides), are taking part in the dialogue.

The President of the Episcopal Conference of Nicaragua Cardinal Leopoldo Brenes, stressed that the dialogue had to start on May 16 at the latest to end the crisis.  "After hearing the roar from the vast majority of society and the gravity of the situation in our country, and even though the circumstances for dialogue aren’t ideal, we are announcing the talks," said Brenes.

Even though the dialogue is considered by many sectors of the government and opposition to be the only solution for the crisis in the Central American Country, it has not been enough to halt looting and clashes between demonstrators and security forces, as well as road blockades and other forms of protest.

Peaceful protests began in April demonstrating against the government’s announcement to increase workers’ and employers’ monthly contribution to the state social security system.  But the demonstrations were immediately hijacked by violent factions that were calling for the ouster of President Ortega.