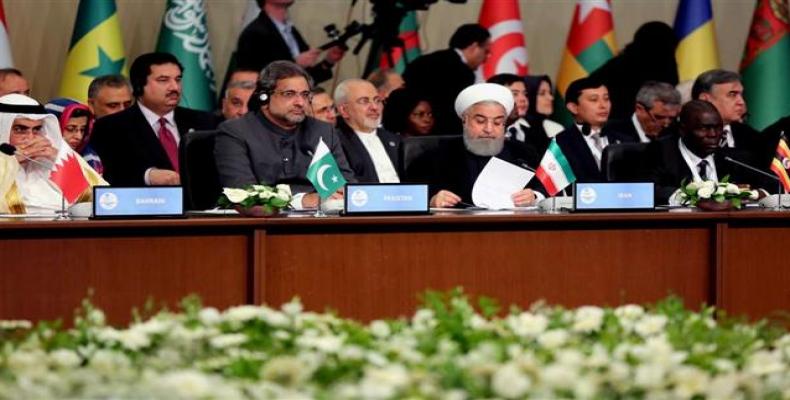 Istanbul, May 19 (RHC)-- Iranian President Hassan Rouhani has called on Muslim countries and other world nations to revise their ties with the United States and sever all their relations with Israel in response to their hostile policies against Palestine.

Speaking at the meeting of the Organization of Islamic Cooperation (OIC) in Istanbul on Friday, Rouhani slammed Israel's recent massacre of Palestinians in Gaza and the relocation of the U.S. embassy to Jerusalem, and offered a number of proposals on how to put an end to such hostile policies.

"In order to assist the Palestinian nation and counter the destructive decision by [U.S. President Donald] Trump, we call on Muslim governments and freedom-seeking nations in the world to revise their political, economic and commercial ties with the US administration, and also cut all their relations with the occupying Zionist regime [of Israel] and boycott the products and companies of the Zionists," Rouhani said.

Muslim leaders gathered in Turkey for an Islamic summit to discuss Israel’s massacre of dozens of Palestinian in Gaza on Monday.  At least 62 Palestinians were killed and more than 2,700 others wounded near the Gaza fence on the eve of the 70th anniversary of Nakba Day (Day of Catastrophe), which coincided this year with the relocation of the US embassy from Tel Aviv to the occupied city of Jerusalem al-Quds.

The occupied territories have witnessed new tensions ever since Trump on December 6, 2017, announced Washington's recognition of Jerusalem as Israel’s “capital” and said the United States would move its embassy to the city.

Rouhani also offered five other suggestions, namely examination of the illegal relocation of the U.S. embassy and Israel's recent crimes in Gaza at a UN General Assembly meeting, formation of an OIC expert group to formulate the required strategies, delivery of humanitarian assistance to Palestine, dismantling of Israel's nuclear weapons and inclusion of the International Quds Day in the official calendars of all Islamic countries.

The Iranian president noted that Israel has been committing crimes against Palestinians for the past 70 years and said that Israel has defied all values and challenged the international community.

"While hundreds of thousands of innocent people are deprived of the most basic human rights, the Zionist regime has deceitfully presented its apartheid and racist regime as a democracy and describes its religious extremism as secularism. The most saddening point is that some Western countries are justifying the aggression of the occupiers," Rouhani said.

He argued that the relocation of the US embassy to Jerusalem al-Quds gave Israel the green light to commit new brutal crimes against Palestinians.  Rouhani called on Muslim nations to lend unanimous support to the resistance movement against Israel and said: "If Israel is surrounded with democratic and developed countries and faces a united ummah, it will never be capable of continuing its crimes so comfortably."

The Iranian chief executive also pointed to the U.S. withdrawal from Iran's nuclear deal and said: "This measure, which was in continuation of other instances of the U.S.' unilateral withdrawal from some other important international agreements, indicated what a grave threat the new U.S. administration is to the international legal system and global security."

U.S. President Donald Trump announced on May 8th that Washington was walking away from the 2015 nuclear deal, known as the Joint Comprehensive Plan of Action (JCPOA), which was reached between Iran and the five permanent members of the UN Security Council -- the U.S., Britain, France, Russia and China -- plus Germany.  Under the JCPOA, Iran undertook to put limits on its nuclear program in exchange for the removal of nuclear-related sanctions imposed against Tehran.

Trump also said he would reinstate U.S. nuclear sanctions on Iran and impose "the highest level" of economic bans on the Islamic Republic.

At the end of the Istanbul summit, the OIC issued a final communiqué calling for the creation of a committee to probe into the Israeli crimes in Gaza and the formation of an international force to protect the Palestinian nation.  The OIC members also urged all countries to put the issue of Israeli violence on the agenda of the UN Security Council and the UN General Assembly.