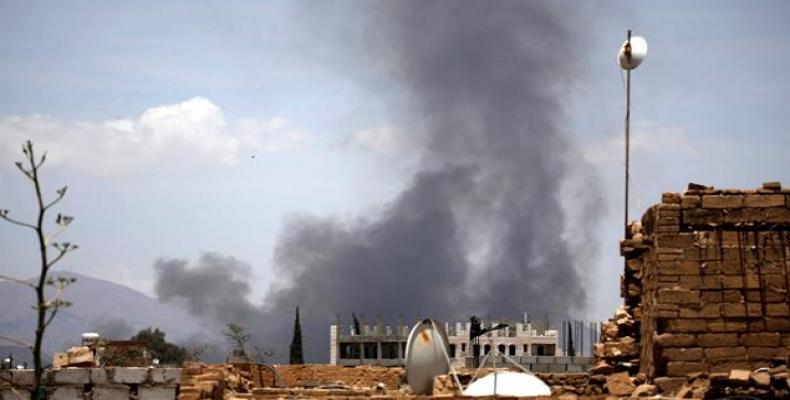 Geneva, May 28 (RHC)-- The United Nations Human Rights office has warned that last month was been the deadliest month this year so far with a "sharp" increase in civilian casualties in Yemen, amid continued Saudi aggression against its impoverished Arab neighbor.  Speaking at a news conference in the Swiss city of Geneva, Ravina Shamdasani, a spokeswoman for the UN High Commissioner for Human Rights said that there were 236 civilian deaths in April alone.

The spokeswoman warned that heavy death toll in the country continued into May as well.  She said six civilians were killed and 57 injured during the first weeks of May.

"Recent attacks against sites located in densely populated areas, including recent air strikes against the presidential office in Sana'a, raise serious doubts about respect of the principles of precaution, distinction and proportionality in international humanitarian law.  Based on the information collected by the U.N. Human Rights office in Yemen, the first raid hit directly the presidential office, which is located in a densely populated area.  Eye witnesses told us that the same building was hit again about seven minutes after the first strike, causing additional casualties among the first responders to the first strike."

"We are deeply concerned about the sharp increase in civilian casualties and call, again, on all parties to the conflict to respect international humanitarian law," she said.  Elsewhere in her remarks, Shamdasani said that Saudi-led coalition was responsible for vast majority of civilian deaths.  "The vast majority of these 10,185 civilian casualties were as a result of airstrikes carried out by the Saudi-led Coalition," she said.

The European Union has also recently expressed concerns about escalating tensions in Yemen, saying the crisis gripping the impoverished country needs a political solution not a military approach.

Saudi Arabia and its allies launched the war on Yemen in March 2015 in support of the country’s former Riyadh-friendly government.  The war has killed and injured over 600,000 civilians, according to the Yemeni Ministry of Human Rights.

The Saudi-led coalition has also blockaded the already-impoverished country. The United Nations says a record 22.2 million people in Yemen are in need of food aid, including 8.4 million threatened by severe hunger.