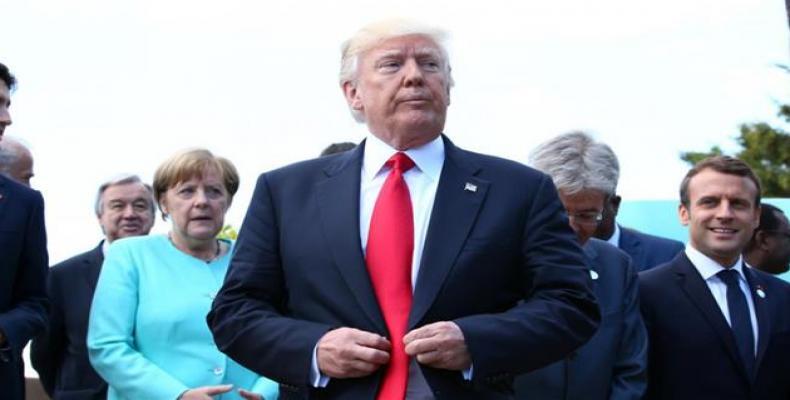 Ottawa, June 7 (RHC)-- With the pending G-7 summit set to get underway, observers note that the gatherings of the world's top powers are often marred by anti-globalist demonstrations in the streets of the host city.  This time, the greatest threat to the liberal world order will be inside the fence.

President Donald Trump arrives to the Quebec G-7, which begins Friday, touting an "America First" agenda that hits U.S. allies with trade tariffs and threatens multilateral free trade deals.  His stance will receive such a hostile reception from the other leaders of the world's richest democracies that some have suggested renaming the G7 summit the G-6+1.

Trump may well be distracted by preparations for his June 12 summit with North Korea's Kim Jong-un, which will be in Singapore immediately after the rich world talking shop in Canada.

But it is not such a stretch to imagine that the U.S. leader will enjoy a warmer encounter with the autocrat from Pyongyang than with his Canadian hosts and European and Japanese allies.

And leaders like Canada's Prime Minister Justin Trudeau and Germany's Chancellor Angela Merkel admit it will be difficult to even agree a joint communique at the two-day meeting.  "We know certainly that there will be frank and sometimes difficult discussions around the G7 table, particularly with the US president on tariffs," Trudeau told reporters.

Merkel told German lawmakers Wednesday before setting off for Canada that there would be "no compromise for its own sake" and that dropping the statement "may be the more honest way."

But Trump's decision to impose tariffs on steel and aluminum -- and eventually other goods, such as German luxury cars -- have pushed G-7 members to the brink of all-out trade war.  Canada's Trade Minister Francois Philippe Champagne was more blunt, declaring: "What we are seeing is that the world economic order is under pressure, under attack."

And Trump is not likely to back down.  "There are disagreements," top White House economics advisor Larry Kudlow told reporters Wednesday.  "He is sticking to his guns."

Kudlow, in common with the longstanding expert consensus in the G7 nations, had long opposed tariffs before joining Trump's team, but now says he agrees that the trade status quo hurts America.  "Until we can have reciprocal relationships we will not have free trade, and we will not have fair trade," Kudlow said. "So I think his cause is just and I think the rest of the world agrees with him."

Europe does not come to Quebec from a position of strength.  Britain's Theresa May is mired in endless Brexit negotiations and Italian premier Giuseppe Conte only formally took power on Wednesday.

French President Emmanuel Macron made initial headway in forming a public friendship with Trump, but has failed to sway the US leader on any issue, while Merkel has been distracted by coalition negotiations.

The G-7's only Asian member, Japan, has close relations with the White House, but Prime Minister Shinzo Abe's support for Trump's North Korean outreach has not seen his country spared the tariffs.