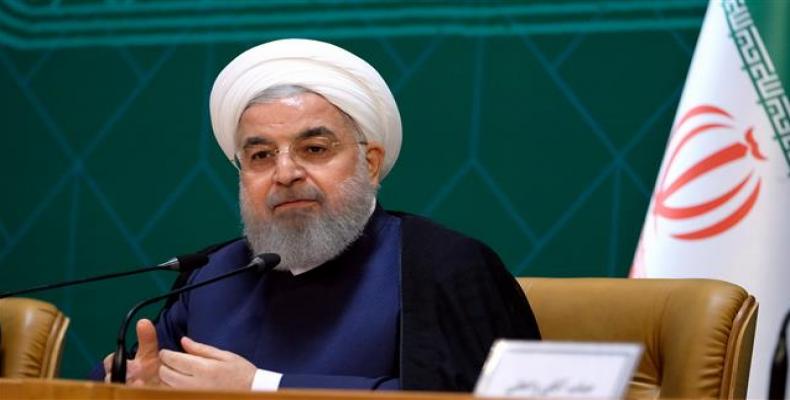 Tehran, June 28 (RHC)-- Iranian President Hassan Rouhani says the Islamic Republic will never yield to U.S. pressure and demands following Washington's withdrawal from the 2015 nuclear deal.  "We will not give in [to pressure] and will maintain our national and historical dignity in the face of the U.S.," Rouhani said in a meeting with senior managers of his administration.  "We will bring the U.S. to its knees in this battle of wills," he added.

The Iranian president said that the Iranian nation would continue to emerge victorious, stressing that bullying powers will come to the conclusion that they had taken the wrong path in dealing with the Islamic Republic.

"Today is the day of hoisting the flag of the dignity and glory of the Iranian nation, and we must show the world that we will endure difficulties and problems, but will not compromise our independence, freedom and democracy."

Rouhani said that his administration was standing in the front line of an economic war being waged by the United States.  He ruled out the possibility of his administration's resignation, and said it would fulfill its duties until the very end.

Elaborating on the economic plans of the government at the current juncture, Rouhani said that job creation, anti-poverty fight, production and regulation of market structure were the four key factors that could ameliorate the economic condition of the country.

Iran's president also called on all political factions as well as businessmen, entrepreneurs and the private sector to cooperate with each other.