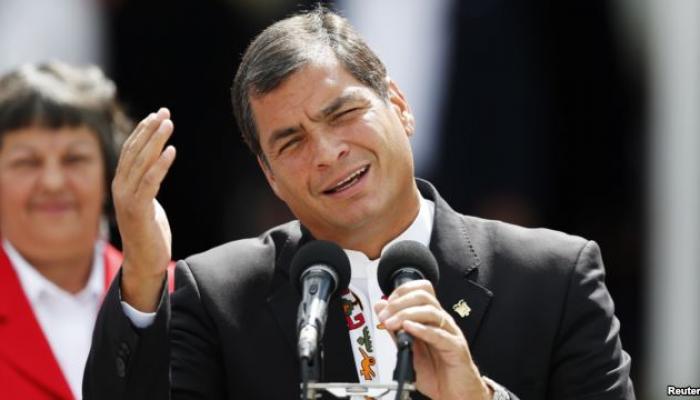 Quito, July 4 (RHC)-- Ecuadorian judicial authorities on Tuesday ordered the preventive arrest of ex-president Rafael Correa, who is charged with taking part in an attempted kidnapping of a political rival five years ago.

Correa, who is currently residing in Belgium with his family, has denied the charge, claiming a political vendetta against him.

Ecuador's General Prosecutor's Office (FGE) announced via Twitter that Interpol will be contacted to carry out the warrant and extradite him.

Correa had previously been ordered to report every 15 days to the National Court of Justice. His failure to do so led to the arrest warrant, said the authorities.

Correa instead reported to Ecuador's consulate in Brussels, saying it was in line with the Vienna Convention on Consular Relations and Ecuador's constitution.

Observers are describing the investigation into the alleged attempted kidnapping of politician Fernando Balda in Bogota, Colombia in August 2012, as part as a US-led well-orchestrated attempt to demoralize and delegitimize progressive political leaders, in order to prevent them from returning to power or to undermine their leadership.

On Tuesday, Correa posted a November 2017 tweet from Balda that announced "several judicial procedures are coming that will lead to an Interpol arrest warrant against Rafael Correa. Save this tweet and mark the date."

Did Balda "guess correctly or is he part of a plot?" Correa asked.