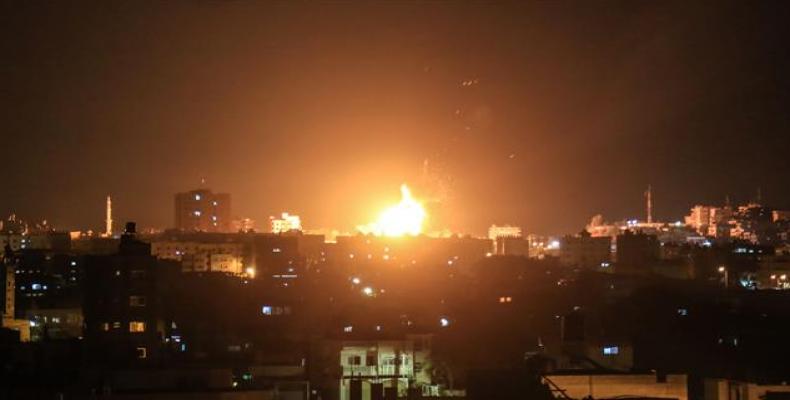 Gaza City, July 16 (RHC)-- Israeli warplanes over the weekend carried out a number of airstrikes against the southern part of the Gaza Strip, as the Tel Aviv regime continues with its acts of aggression against the besieged Palestinian coastal territory.

The Israeli military said in a statement that in the early hours of Saturday, its warplanes hit several locations in Gaza including a tunnel and a number of bases purportedly belonging to the Palestinian Hamas resistance movement.

The statement added that the aerial bombardment was retaliated by a barrage of at least 17 rockets or mortars launched by Hamas into the occupied Palestinian territories.  It claimed that Israel's so-called Iron Dome system managed to intercept five of the launches, but one landed inside a rural settlement in the Sha'ar HaNegev Regional Council area.

Following the Israeli airstrikes in southern Gaza Strip, sirens were sounded across the areas bordering the impoverished Palestinian enclave.  The Israeli regime's warplanes have repeatedly hit various parts of the Gaza Strip during the past decade.  Hamas has repeatedly stressed that the movement has a legitimate right to respond to any Israeli aggression against the people of Palestine.

Palestinians in Gaza have been rallying every Friday since March 30 as a part of a peaceful campaign known as the Great March of Return.  So far, Israeli forces have killed about 140 Palestinians, including over a dozen children, and injured hundreds of others during the rallies.

The United Nations Children's Fund (UNICEF) has said children in the Gaza Strip are the main victims of Israeli atrocities, where some 1.8 million people are living under a crippling blockade.

Gaza has been under Israeli siege since June 2007, causing a decline in living standards as well as unprecedented unemployment and poverty.  Israel has also launched several wars on the Palestinian sliver, the last of which began in early July 2014 and ended in late August the same year.  The Israeli military aggression killed nearly 2,200 Palestinians and injured over 11,100 others.