Mexican president-elect to cut own salary by 60 percent 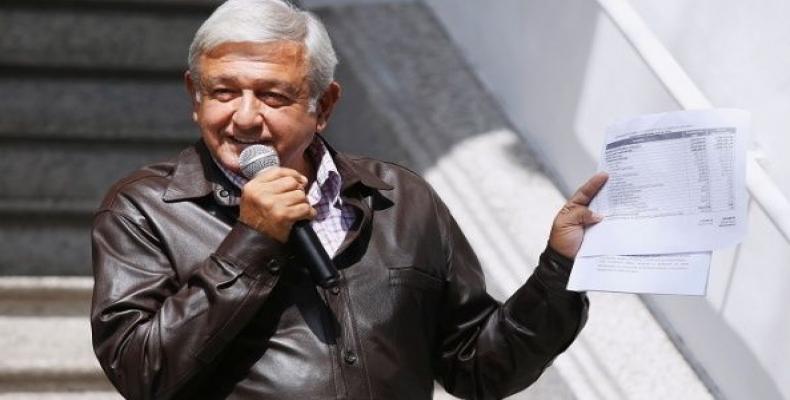 Mexico City, July 17 (RHC)-- Mexico's president-elect Andres Manuel Lopez Obrador has announced he will cut his own salary by 60 percent once he is sworn in.   Following a meeting with his future cabinet, Lopez Obrador told the press that the country's president earns about $14,270 a month, according to the treasury department.  “I will earn 108,000 pesos a month [about $5,700], 40 percent of what president Peña currently gets.  I choose to earn less than half, complying with my promise,” he said.

This is part of a plan dubbed by Lopez Obrador as “republican austerity,” which aims to reduce government and bureaucracy costs and use the savings for social programs, one of his main campaign promises.  He said he wanted to lower his salary even more but that would affect other future public servants that today “earn more in universities and companies,” as the austerity measures state that no public servant will be able to earn more than the president.

The austerity plan consists of 50 measures, including cutting some of the highest salaries and benefits in the federal government, reducing the “exempt staff” and operation costs by 70 percent, not acquiring any new vehicles and limiting travel expenses.  It will also cut half the government's expenses on publicity and prohibit private meetings between officials and contractors.

Lopez Obrador has been meeting with future cabinet members of his administration, which will begin its mandate on December 1st.  Two weeks after being elected by 53 percent of voters, the future president will be taking a break from post-victory work on July 16 to 19.