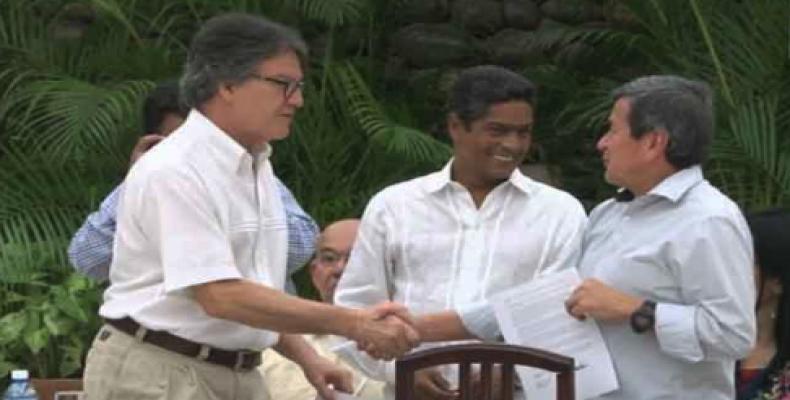 Havana, August 2 (RHC)-- Colombia’s outgoing government and the South American nation’s last remaining guerrilla group concluded their sixth and final round of talks on Wednesday without reaching a temporary ceasefire deal, a step considered essential to further advances in the peace process.

“The goal of achieving a ceasefire was not achieved, but quite a lot of progress was made,” the government’s chief negotiator, Gustavo Bell, said of the discussions with representatives of the National Liberation Army (ELN).  Bell stressed that a truce was “necessary to provide society with guarantees for directly participating in the construction of peace.”

An earlier three-month ceasefire agreement between the government and the ELN expired in January.

No more rounds of talks will take place during the tenure of President Juan Manuel Santos, whose mandate concludes on August 7.

The ELN has said it is willing to resume talks with the new administration headed by Ivan Duque, although the conservative president-elect has not issued a statement on the future of the negotiations.

The two parties said in a statement to reporters in Havana that major strides had been made in the sixth round of negotiations toward both a temporary bilateral ceasefire and the design of a plan for societal participation in the peace process.

Bell said Duque would have to decide how to proceed with the process, although he recalled that Colombia’s charter states that “peace is a constitutional right and duty.”

The ELN’s chief negotiator, Pablo Beltran, said for his part that in recent days the parties made significant progress in sketching out a new ceasefire deal and that the guerrilla group expected that the advances made in the sixth round would serve as a foundation for a seventh round of talks with the new administration.

He also expressed confidence that a truce would “provide protection for many sectors of Colombian society, social leaders, activists that today are the target of persecution and genocide.”

The public phase of talks between the ELN and the Colombian government began in February 2017 in Quito but were moved in May of this year to Havana, where a historic peace deal with the Revolutionary Armed Forces of Colombia (FARC) rebel group was brokered in 2016.