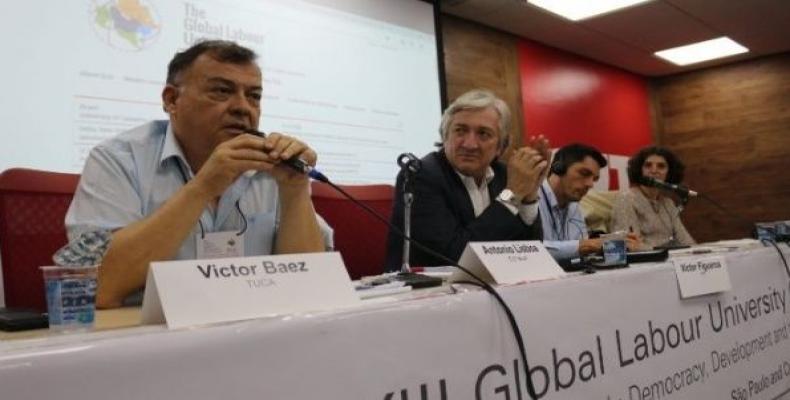 Sao Paulo, August 9 (RHC)-- Unionists from Brazil and other parts of the world took part in the International Action in Defense of Democracy in which they expressed support for former Brazilian President Luiz Inacio Lula da Silva at the headquarters of the Central Workers' Union, the CUT, in Sao Paulo.  The event coincided with the opening of the 13th Global University of Work Conference, GLU.

At the beginning of the event, Antonio Lisboa, CUT's secretary of international relations, thanked union leaders and activists around the world who've shown their support for the struggle of the Brazilian people for democracy, the release of Lula from prison and his right to run in the October presidential election.

He said that international support for the cause was particularly important in spreading Lula and Democracy Solidarity Units, which are represented by social movements, union organizations and political parties.

“From this, committees were created around the world, some of them located in Paris, London, Geneva, Washington, Berlin, New York, Lisbon, Madrid, Barcelona, Argentina, Rome, Amsterdam and a committee in Vienna is being organized.  The more committees that were created, the stronger our struggle became for democracy, rights and for Lula's freedom,” Lisboa said.

The president of CUT, Vagner Freitas, also thanked international unions and social movements support for their cause.  “I dare say, that if it was not for international solidarity, the coup-mongers would have gone even further with the coup.  They are afraid because they're worried about what will happen internationally.”

Despite his conviction and imprisonment for corruption, events that many legal experts and observers attribute to lawfare and an intensive mainstream media campaign, Lula has topped every 2018 electoral poll conducted by Vox Populi, Ibope, Datafolha, Data Poder 360, Instituto Parana, the National Confederation of Transportation/MDA and Ipsos.

Lula's two terms in office were marked by a slew of social programs, lifting millions of Brazilians out of poverty and removing the country from the United Nations World Hunger Map.  He left office with a record approval rating of 83 percent in 2011, according to Datafolha.