U.S. singer Aretha Franklin dies at the age of 76 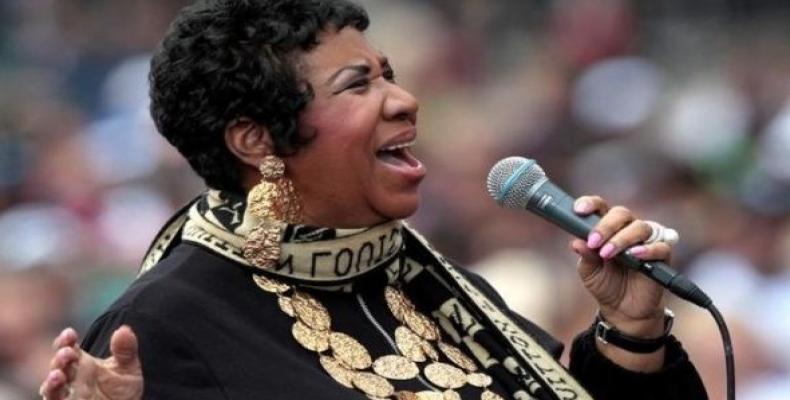 Detroit, August 16 (RHC)-- Aretha Franklin, the “Queen of Soul,” regarded as one of the greatest singers of all time and a recognized figure of the Civil Rights movement in the U.S., passed away Thursday of advanced pancreatic cancer.

“In one of the darkest moments of our lives, we are not able to find the appropriate words to express the pain in our heart.  We have lost the matriarch and rock of our family.  The love she had for her children, grandchildren, nieces, nephews, and cousins knew no bounds,” Franklin’s family noted in a public statement.

Aretha Franklin was born into a family of Black activists on March 25, 1942 in Memphis, Tennessee.  They moved to Detroit, where her father, Clarence La Vaughn Franklin, a preacher of Black Liberation theology, led the New Bethel Baptist Church, when she was 4 years old.

Her family considered leaders such as Betty Shabazz, Malcolm X, Adam Clayton Powell, Jesse Jackson and Martin Luther King Jr. as close friends and allies and, in 1969, their church hosted the First New African Nation Day Celebration.  A shootout occurred between authorities and activists.  A policeman was killed, several members of the Republic of New Afrika were injured and hundreds were arrested.

Aretha, however, began singing spirituals and gospels at New Bethel church when she was just 10.  She performed while traveling on “gospel caravan” church tours.  Her father helped her sign her first record deal with JVB Records, which released her debut album “Songs of Faith” in 1956.  Soon after she would sign with Columbia Records to pursue a solo career.

Aretha signed with Atlantic Records in 1966, where she released a series of hit songs, including her version of Otis Redding's song, “Respect,” in 1967.

Skyrocketing to number one on the charts and remaining there for at least 12 weeks, “Respect,” which became as impactful as Nina Simone's “Mississippi Goddamn,” caught on with the Black power movement, feminists and human rights activists worldwide, according to AL.com. The song's appeal has stood the test of time, becoming a symbol of the #MeToo movement.

Other popular hit songs in her vast repertoire included (You Make Me Feel Like) A Natural Woman and I Say a Little Prayer.

Following her performance of (You Make Me Feel Like) A Natural Woman at the 2015 Kennedy Center Honors, former U.S. President Barack Obama said: “Nobody embodies more fully the connection between the African-American spiritual, the blues, R&B, rock’n’roll – the way that hardship and sorrow were transformed into something full of beauty and vitality and hope” than Aretha Franklin.

Speaking to the Washington Post in 1987, author Peter Guralnick said “Aretha shattered the atmosphere, the aesthetic atmosphere... She set a new standard which, in some way, no one else could achieve.”

Aretha Franklin won 18 Grammy awards and sold over 75 million records throughout her career.

In tribute to Aretha, Beyonce, who performed with her husband, Jay-Z, in Detroit on Monday night, thanked the “Queen of Soul” for her “beautiful music.”

“On one occasion, we took an 11-city tour with her as Aretha Franklin and Harry Belafonte… and they put gas in the vans. She did 11 concerts for free and hosted us at her home and did a fundraiser for my campaign.  Aretha has always been a very socially conscious artist, an inspiration, not just an entertainer.