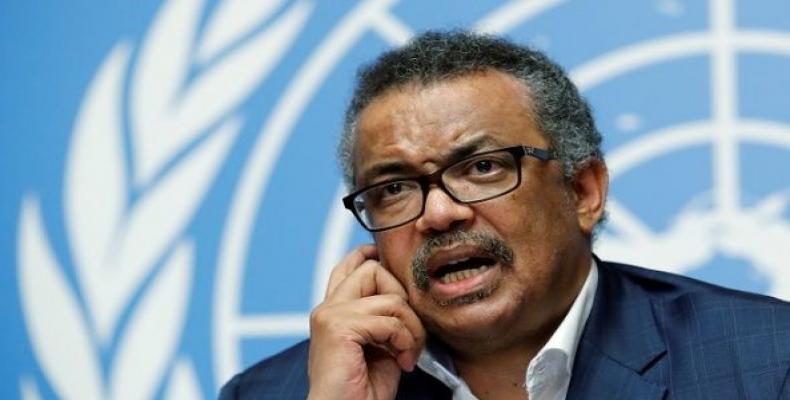 Geneva, August 20 (RHC)-- Raging conflict is hampering efforts to rein in an Ebola outbreak in the Democratic Republic of Congo, the WHO chief has warned, urging a ceasefire to stop the virus from transmitting freely.  As the death toll in the outbreak declared on August 1st in DRC's violence-wracked North Kivu province hit 41, the World Health Organization chief also called for the rapid roll-out of an unlicensed drug being used for the first time to treat Ebola patients.

Tedros Adhanom Ghebreyesus told reporters in Geneva he feared conditions on the ground in the eastern province had created "a conducive environment for the transmission of Ebola."  The outbreak in North Kivu's Beni region, which shares borders with Uganda and Rwanda, was declared a week after the WHO and the Kinshasa government hailed the end of an Ebola flare-up in northwestern Equateur province, which killed 33 people.  The latest outbreak, which now counts 57 probable and confirmed cases of the deadly virus, is the country's 10th since 1976 when the disease was first identified in the DRC near the Ebola River.

DRC health authorities said that for the first time since the outbreak was announced, one fatality was recorded outside of North Kivu — in the neighboring province of Ituri.  The new outbreak poses the same problems as past cases in the DRC, including major logistical hurdles in a volatile country with weak health infrastructure. But in North Kivu, health workers are being forced to navigate their response among more than 100 armed groups, and Tedros said that there have been 120 violent incidents since January alone.

He said the region was sprinkled with so-called "red zones", or inaccessible areas. "That environment is really conducive for Ebola ... to transmit freely." "We call on the warring parties for a cessation of hostilities, because the virus is dangerous to all. It doesn't choose between this group or that group," he said.

Ebola causes serious illness including vomiting, diarrhea and in some cases internal and external bleeding. It is often fatal if untreated.  In a bid to halt the virus's lethal advance, DRC health authorities said Tuesday that doctors in Beni had begun using a prototype drug called mAb114 to treat patients.

The treatment is "the first therapeutic drug against the virus to be used in an active Ebola epidemic in the DRC," the health ministry's directorate for disease control said. Developed in the United States, the prototype drug is a so-called single monoclonal antibody — a protein that binds on to a specific target of the virus and triggers the body's immune system to destroy the invader.

In May, the U.S. National Institute of Allergy and Infectious Diseases (NIAID) said it was carrying out the first human trials of mAb114 to test it for safety and tolerance.  Tedros said five patients had received the unlicensed drug so far, and that WHO would like the roll-out "to speed up as much as possible."

Use of the experimental treatment in the field comes on the heels of deployment of an unlicensed vaccine in the earlier Ebola outbreak in the DRC this year.  The decision to use the vaccine, called rVSV-ZEBOV, came after trials during the 2013-2015 pandemic in West Africa showed it to be safe and effective, the WHO says.

The vaccine played a significant role in halting Ebola's spread in Equateur province, and should also be useful in fighting the new outbreak.  Targeted vaccination, aimed primarily at front-line health workers, began last week, and so far 216 people have received a jab.

But Tedros warned that lack of access could impact the efficiency of the current vaccine campaign, which is based on so-called ring vaccination aimed at immunizing every person who has been in contact with the sick, and all of their contacts. He said WHO and its partners were considering other approaches, including possibly vaccinating all 1,200 people living in Mangina, where at least seven health workers have been infected.