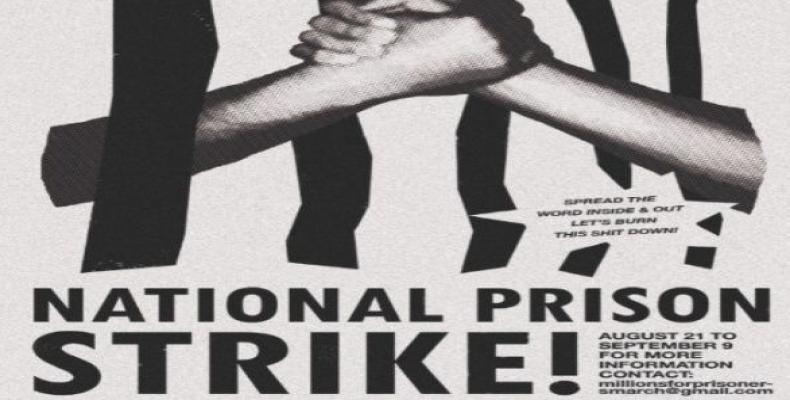 Ramallah, August 24 (RHC)-- Several members of the Popular Front for the Liberation of Palestine, all of whom have been jailed by Israel for their participation in the struggle for national independence, have released a statement in solidarity with the national U.S. prisoners strike, which began on Tuesday.

“We write today as imprisoned Palestinians of the Popular Front for the Liberation of Palestine, held in Israeli jails for our participation in struggle for the liberation of our land and people from colonialism and occupation.

“Today, we extend our solidarity to the prisoners in the jails of the United States participating in the national prison strike beginning on August 21, fighting exploitation, racism and capitalism from within the heart of imperialist prisons... Black communities, Latino communities, Arab communities are under attack, facing mass incarceration and a system that seeks to imprison and exploit rather than support and nurture youth and elders.”

The statement expressed the group's “mourning for George Jackson, the imprisoned revolutionary and martyr of the Black Liberation struggle.  The strike began on the 47th anniversary of his martyrdom, an event that was recognized in Palestine and around the world at the time as an assassination of a true voice of struggle by the U.S. ruling class.”

It also noted that Jackson was an “internationalist and that the works of Palestinian poet Samih al-Qasem – addressing imprisonment and resistance – were found in his cell after his assassination. Today, we write to you to once again forge that connection of struggle, despite our different circumstances.”

“We extend a special revolutionary salute to the imprisoned fighters of the Black Liberation Movement and other liberation movements, including Mumia Abu-Jamal, whose consistent internationalism and principled struggle is known and resonates around the world. We demand the freedom of these freedom fighters in U.S. jails, from Leonard Peltier to Mutulu Shakur... We know from our experience that it is through struggle and confrontation that true freedom can be realized.”

Prisoners across the United States, home to the world's largest prison population, went on strike in at least 17 states Tuesday.  Prisoners are refusing to work, holding sit-ins and going on hunger strikes from August 21 -- the 47th anniversary of the murder of Black Panther member, by correctional officers in San Quentin -- until September 9th, which marks the 47th anniversary of the Attica prison uprising for humane conditions and fundamental socio-political rights.

Led by incarcerated members of the Jailhouse Lawyers Speak, a group of prisoners providing mutual help and legal training to other inmates, the strike aims to bring attention to and an end to “modern slavery” conditions in U.S. prisons.

“Fundamentally, it’s a human rights issue.  Prisoners understand they are being treated like animals.  Prisons in America are a war zone.  Every day prisoners are harmed due to conditions of confinement.  For some of us it’s as if we are already dead, so what do we have to lose?” a statement read by the group.

Every day, over 800,000 inmates are forced to work in different industries operating in U.S. prisons.  In an industry that rakes in two billion U.S. dollars per year, prisoners in the state of Louisiana, for example, receive just four cents per hour.