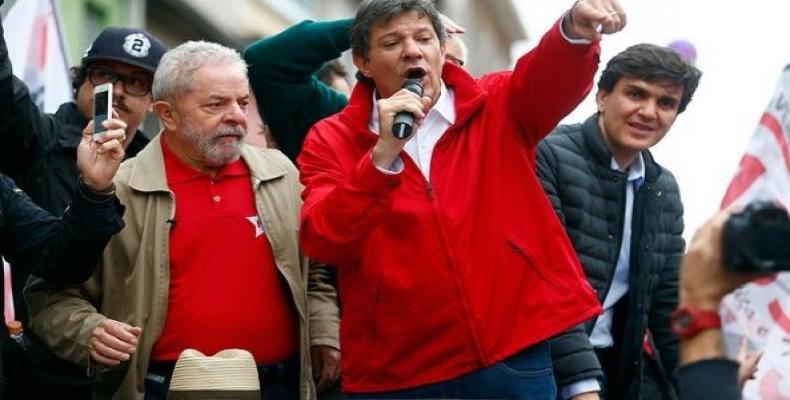 Brasilia, September 12 (RHC)-- Former Brazilian president and Workers' Party (PT) co-founder Luiz Inacio Lula da Silva Tuesday handed over his presidential candidacy to his vice presidential running mate, Fernando Haddad.  The announcement was made at an event held in front of the prison where the former president has been held since April over a controversial corruption conviction.

The Workers' Party national executive committee had decided that Haddad will be its presidential candidate in the October 7 vote, said committee member and Minas Gerais state Governor Fernando Pimentel.  Lula's candidacy was rejected by the country's Supreme Electoral Court over the fact that his conviction had been held on the first appeal, which in turn bars him from running for public office according to Brazilian law.

Legal experts say that Lula's conviction is based on unfounded evidence and comes as part of a right-wing judicial strategy to prevent him from becoming president.

The news comes less than a day after Actor Sergio Mamberti read a letter penned by Lula at the "Pulling Off Victory" event held at the Tuca Theatre, Pontifical Catholic University of Sao Paolo.

"Here, from afar, I feel the force irradiating from yet another historic night at the Tuca. Neither distance or walls stop it...As I said during my farewell on April 7 (date Lula surrendered to federal police on corruption charges)... that the struggle will continue even stronger through you. My voice is Fernando Haddad and all comrades in our fearless journey to restore national dignity in all corners of the country."

"Let us pull off victory in these four weeks.  Let us subscribe, on this night, our commitment to struggle... with the youth leading the charge, the women, the Black population, the working class, the universities, education, science and culture."

On Tuesday it was announced that Haddad's running mate for vice-president will be congresswoman Manuela D'Avila of the Communist Party of Brazil.

Despite his conviction and imprisonment for corruption, events that many legal experts and observers attribute to lawfare and a salacious mainstream media campaign, Lula has topped every 2018 electoral poll conducted by Vox Populi, Ibope, Datafolha, Data Poder 360, Instituto Parana, the National Confederation of Transportation/MDA and Ipsos.

Lula's two terms in office were marked by a slew of social programs, lifting millions of Brazilians out of poverty and removing the country from the United Nations World Hunger Map.  Lula left office with a record approval rating of 83 percent in 2011, according to Datafolha.

Manuela D'Avila, a journalist and politician, served as congresswoman for Rio Grande do Sul from 2007 to 2015.  She currently serves as a state deputy.