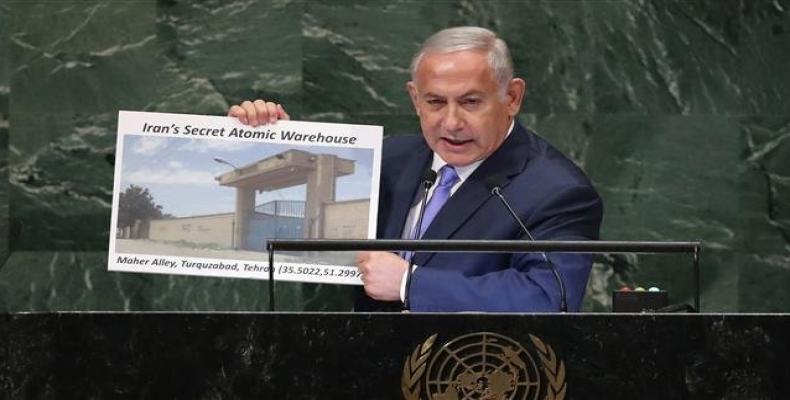 United Nations, September 28 (RHC)-- Israeli Prime Minister Benjamin Netanyahu has once again taken the stage at the United Nations to bring out fresh theatrics against Iran, repeating his allegations that the country is working to develop nuclear weapons at what he called "secret" sites.

As expected, Netanyahu used a map and photographs of a building that he claimed was a "secret atomic weapons warehouse" in the Iranian capital, Tehran, to justify his false accusations during his speech on Thursday at the 73rd annual session of the UN General Assembly in New York.

Netanyahu was referring to his earlier dubious show against Iran, during which he went live on television and put on display what he called records from a secret warehouse in Tehran.  Iran rejects as “laughably absurd” an Israel-fabricated scenario, in which Mossad agents are claimed to have stolen "secret documents" on Iran's nuclear work from a site in southern Tehran.

The claims came while Iran has drawn the praise of the world community for remaining fully committed to its 2015 nuclear deal with world powers despite Washington's much-criticized withdrawal from the international document.

Iran's compliance with the deal has been verified in numerous reports by the International Atomic Energy Agency -- the UN's nuclear watchdog, which uses strict mechanisms to monitor the technical aspect of the agreement's implementation.

During his anti-Iran rant, Netanyahu further slammed the European Union for firmly supporting the nuclear accord after Washington -- influenced by intense Israeli lobbying -- scrapped the international document.

"While the United States is confronting Iran with new sanctions, Europe and others are appeasing Iran by trying to help it bypass those new sanctions," Netanyahu said, referring to EU efforts to compensate for Washington's absence and keep Iran in the deal.  The EU says it could start facilitating trade with Iran through its ‘special purpose vehicle’ before November.

Netanyahu's new 'show' at the UN was nothing new.  Observers say the Israeli premier indulges in theatrics as a method to influence public opinion, without providing any proof to support his claims.

During his dramatic performance in early May -- which was widely ridiculed inside Iran and abroad -- Netanyahu claimed agents with Israel's Mossad spy agency had managed to break into the warehouse in an overnight operation and bring back “half a ton of the material” consisting of 55,000 pages and another 55,000 files on 183 CDs.

Iran's foreign minister has likened Israeli Prime Minister Benjamin Netanyahu to "the boy who cried wolf," saying he "can only fool some of the people so many times."  Iranian Foreign Minister Mohammad Javad Zarif called the Israeli premier "the boy who can't stop crying wolf is at it again," recalling a similar anti-Iran speech by Netanyahu at the UN General Assembly in 2012, during which he used a cartoon bomb in an attempt to portray the Islamic Republic as a threat.

Except in the U.S., Netanyahu's claims, however, have fallen on deaf ears, with the European Union's foreign policy chief, Federica Mogherini, saying the presentation failed to question Iran's compliance with the nuclear agreement.

Emboldened by the uncritical support of the U.S. under President Donald Trump, Netanyahu even threatened Iran with a nuclear attack during a speech at the regime's secretive Dimona nuclear weapons facility.

In response, Tehran wrote to the United Nations, calling on the world body to condemn Israel for the nuclear attack threat and bring the regime’s atomic weapons program under its supervision.