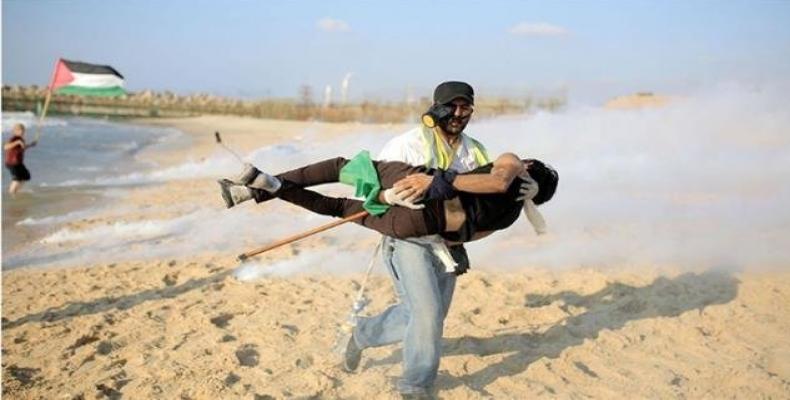 Gaza City, October 23 (RHC)-- Israeli soldiers have wounded at least 20 Palestinians in an attack on demonstrators that had gathered along Gaza’s territorial waters to stage a new protest against Israel’s occupation.

The injuries occurred after Israeli forces attacked hundreds of peaceful Palestinian protesters with live ammunition during a naval protest in the town of Beit Lahiya in the northern Gaza Strip on Monday.

The Palestinian Ma'an News Agency said Israeli forces opened fire at protesters approaching the fence separating Gaza from the occupied territories and hurled teargas bombs that caused many to suffer from respiratory problems.

The Gaza Health Ministry said at least 20 people were wounded in the raid near the maritime border with the occupied territories, adding that the injured were transferred to hospitals for medical treatment.

The Palestinian protesters, in response, moved dozens of boats toward an Israeli navy vessel in an attempt to break the 12-year-long siege on Gaza.    The demonstration on Monday was the 13th naval protest against the crippling blockade of the enclave.

The Gaza Strip has been under an inhumane Israeli siege since 2007 and witnessed three wars since 2008.  The blockade has caused a decline in living standards as well as unprecedented levels of unemployment and poverty.

The deadly clashes in Gaza reached their peak on May 14, the eve of the 70th anniversary of Nakba Day, or Day of Catastrophe, which coincided this year with Washington's relocation of the U..S embassy from Tel Aviv to occupied Jerusalem.