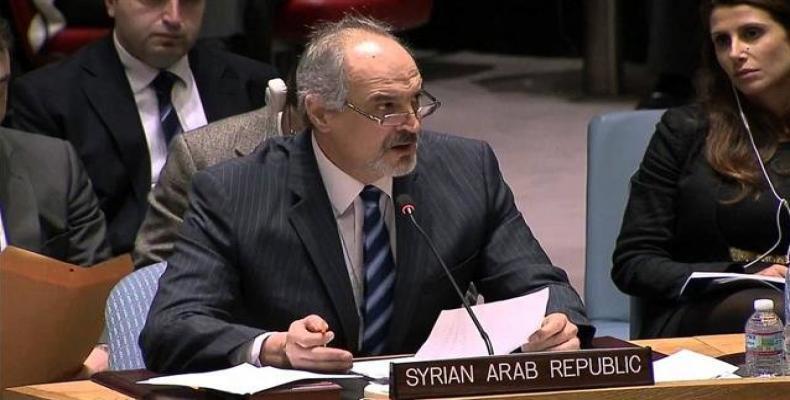 Speaking at a UN Security Council meeting, the Syrian senior diplomat further condemned the use of banned weapon by the U.S.-led coalition against the small city.  His comments came a few hours after Syria’s official news agency SANA, citing local sources, reported that earlier in the day, the so-called coalition had shelled several localities in Hajin, some 110 kilometers east of Dayr al-Zawr, with white phosphorus munitions that can maim and kill by burning to the bone.

Elsewhere in his remarks, Ja'afari added that terrorists in Idlib had fired at least 40 rockets at Aleppo city, with no immediate reports of possible casualties and the extent of damage caused.  Ja'afari said that Syria believed in the neutral, independent, and non-politicized role of the world body in assisting the Syrians affected by terrorism and militancy, stressing that this role must respect “Syria’s sovereignty, independence, and territorial integrity.”

The senior Syrian diplomat further stated that Damascus had approved sending an aid convoy to al-Rukban camp by the UN, but the U.S. forces were hindering the delivery of desperately-needed aid to the camp.

He also said that the so-called “cross-border aid,” mentioned in a recent report on the “humanitarian situation” in Syria, did not reach those who need it but rather “went to terrorists.”  Ja'afari also asserted that Damascus made preparations to facilitate the return of displaced Syrians to their home country, and that the Syrian army troops would keep on fighting against terrorism until Syria, in its entirety, is cleared of “terrorism and any illegal foreign presence.”

Syria has been gripped by foreign-backed militancy since March 2011. The Syrian government says the Israeli regime and its Western and regional allies are aiding Takfiri terrorist groups wreaking havoc in the country.