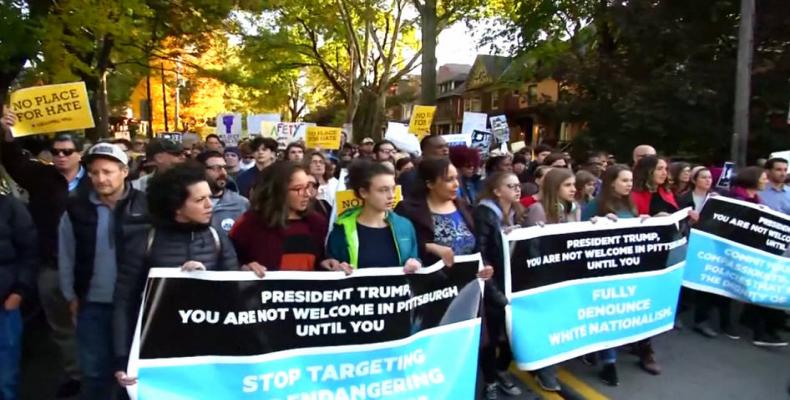 Pittsburgh, November 1 (RHC)-- Thousands of people marched in the U.S. city of Pittsburgh to protest President Donald Trump’s visit to the city and the Tree of Life synagogue, where 11 Jewish worshipers were shot and killed Saturday in what has been described as the deadliest anti-Semitic attack in U.S. history.

Trump’s visit came despite many local leaders publicly boycotting it, including Pittsburgh Mayor Bill Peduto, the former leader of the synagogue and a group of local Jewish leaders who told the president he is not welcome in Pittsburgh until he “fully denounces white nationalism.”

One of those protesting the visit, Dr. David Glosser, told reporters: “Mr. Trump has made it his policy to vilify and dehumanize Hispanics, Muslims, nonwhites, calling them subhuman animals that are infesting our country like so many insects or rats.  Make no mistake about it: This is the same kind of propaganda that is identical to the racist rants at Nazi Party rallies in Germany in the 1930s.”

As the Trumps visited the synagogue, protesters marched in the synagogue’s Squirrel Hill neighborhood.  As Trump’s motorcade left the area, some turned their backs and took a knee in protest.