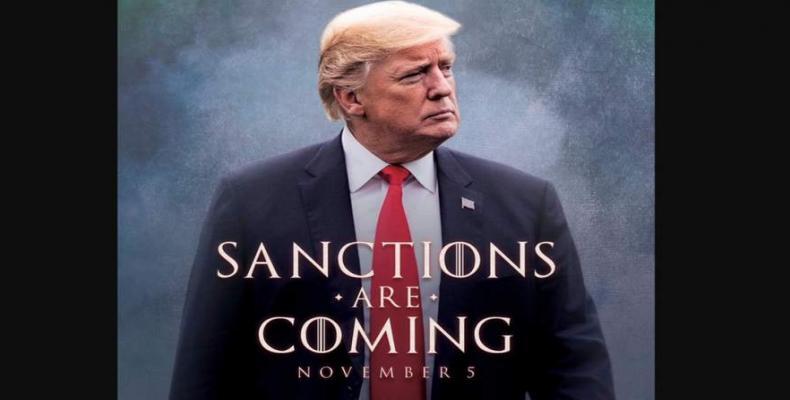 Washington, November 5 (RHC)-- The Donald Trump administration has reimposed harsh economic sanctions against Iran, drawing condemnation from European allies and massive protests across Iran.  The new sanctions officially began at 12:01 Monday morning, six months after President Trump withdrew the U.S. from the 2015 nuclear agreement that saw Iran win sanctions relief in return for abandoning much of its nuclear program.

Over the weekend, France, Germany, Britain and the European Union issued a joint statement condemning the U.S. move, calling the Iran deal “essential for the security of Europe, the region and the whole world.”

But European and Asian companies have largely cut back purchases of Iranian oil for fear of reprisals from Washington.  The sanctions came just after Iranians celebrated the 39th anniversary of the Islamic revolution -- marking the date, November 4, when college students stormed the U.S. Embassy in Tehran, taking U.S. diplomats hostage.

Over the weekend, Trump tweeted a photo of himself with the words “Sanctions Are Coming November 5” over his image. The words were written in the font of the popular HBO program, “Game of Thrones.” In a statement, HBO said it “would prefer our trademark not be misappropriated for political purposes.”