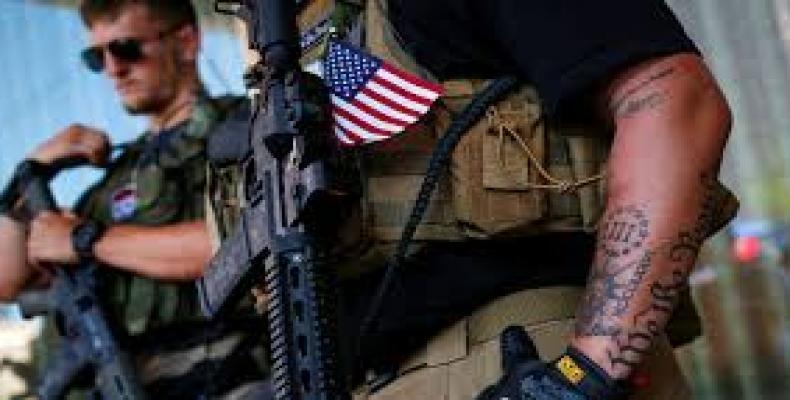 El Paso, November 5 (RHC)-- Armed members of several U.S. militias have headed to towns near the border with Mexico in preparation for a possible face-off with a large caravan of immigrants moving towards the United States.

A number of militia members entered the small city of Columbus in New Mexico over the past days, offering to help officials with handling the illegal immigrants, the Albuquerque Journal reported Saturday.   Jim Peyton, a militiaman from Jasper, Alabama, told the Journal that he and a group of other armed members were scouting locations to prepare for the caravan.  He said the militia members only wanted to stop what he called "bad guys" and carried weapons only for self-defense.    "We're here to assist when possible," he said.  "We don't have the authority to touch, corral, interfere.  That would be illegal because we are not authorized to do so."

Peyton said he had informed the U.S. Customs and Border Protection as well as Mayor Salas Ezequiel of his presence in town.  According to Peyton, the militias will notify Border Patrol dispatch if they spot illegal crossings or smuggling.   Ezequiel played down the concerns about violent behavior by the immigrants at the border, saying many people from elsewhere "hear things that are not true."

Columbus is 68 miles (109 kilometers) west of El Paso, Texas.  The US Border Patrol's El Paso Sector, which includes the New Mexico part of the border, confirmed that it was aware of people in the area "with the goal of 'patrolling' the border, but they are not working in conjunction with the Border Patrol."

U.S. President Donald Trump has sent thousands of troops to the border in order to repel the caravan.  Trump said last week that the troops might need to open fire on the immigrants if they were attacked, a statement he recanted later on.