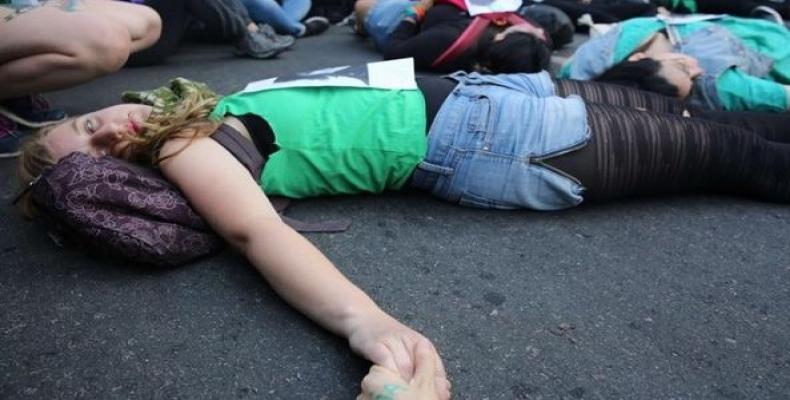 Buenos Aires, December 7 (RHC)-- Thousands of women in Argentina took to the streets to protest against the inaction of the judiciary regarding the femicide of Lucia Perez.

Three Mar del Plata judges acquitted Alejandro Maciel (61), Matias Farias (25), and Pablo Offidani (43) for the rape and murder of Lucia, which resulted in a nationwide strike under the slogan #NiUnaMenos (Not one less).  Argentinean women are also demanding justice for all the victims of femicide.

The #NiUnaMenos collective called for a "National Strike" to protest against the three male judges who argued that Lucia was neither raped or murdered.  Two of the men were sentenced to eight years in prison for drug possession. Maciel, who was initially charged with helping to cover up the crime, was absolved.

"This ruling not only leaves Lucia's crime unpunished, but it is a message of discipline to the entire women's movement because it criminalizes autonomy, including in the justifications to absolve the murderers, that Lucia 'fucked who she wanted'", said Veronica Gago, from #NiUnaMenos.

Lucia Perez, a 16-year-old teenager from Mar del Plata was drugged, raped, and killed by two men on October 8, 2016.  Her murder served as the catalyst of the #NiUnaMenos movement which shook the whole of Latin America as women from the region organized massive protests under the slogan. Protests against femicides and a skewed justice system that promotes impunity in these cases are held yearly.

On Monday, Lucia’s mother Marta Montero gave a speech at the headquarters of the Confederation of Workers of the Popular Economy (CTEP) in Buenos Aires where she said, "Lucia was killed on Oct. 8, 2016 and with the sentence of Nov. 26, 2018 they killed her again", adding, "what we have to do as women is fight, make them listen to us because we can not lose more girls."

A report published on Nov. 21 by La Casa del Encuentro (The Meeting House), an Argentine civil society organization, revealed there is one femicide every 32 hours in Argentina.

According to data by the Femicide Observatory of Argentina, around 225 women were murdered between Jan. 1 and Oct. 31, 2018. Of these, around 200 were perpetrated by former partners or relatives of the women.