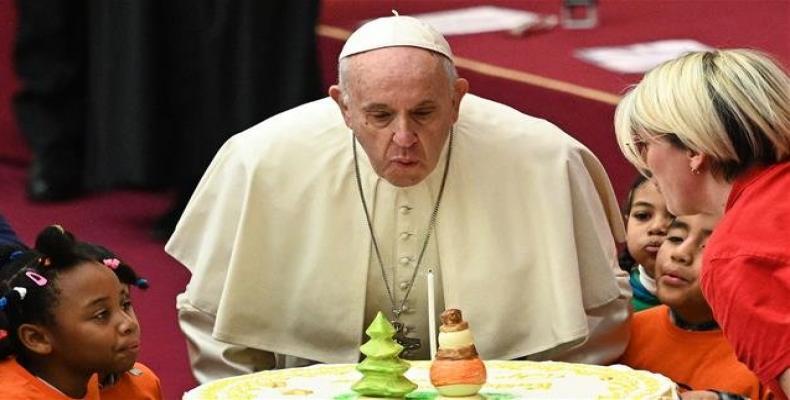 Vatican City, December 19 (RHC)-- Pope Francis has warned politicians of the dangers of exploiting nationalism and xenophobia as far right sentiments are on the rise across Western countries.

The head of the Roman Catholic Church, in a message released Tuesday, also stressed the need about addressing fear of foreigners to undermine the trust essential to their task of binding societies together.

"Political addresses that tend to blame every evil on migrants and to deprive the poor of hope are unacceptable," the Catholic leader said in the message entitled: "Good politics at the service of peace."

This is because "human relations are complex, especially in our own times, marked by a climate of mistrust rooted in the fear of others or of strangers, or anxiety about one's personal security," the pontiff added in the message.

"Sadly, it is also seen at the political level, in attitudes of rejection or forms of nationalism that call into question the fraternity of which our globalized world has such great need.

The Pope also stressed for societies to be governed by the rule of law. Trust based on an "authentic political life, grounded in law and in frank and fair relations between individuals... is never easy to achieve," Pope said in the message which will be used to mark World Peace Day on January 1st. "Today more than ever, our societies need 'artisans of peace'."

Elsewhere in his remarks, Pope Francis warned against corruption and the pursuit of personal ambition at the expense of wider society. He concluded by saying that when rulers look out only for themselves, the future is compromised, especially for the younger generations which become marginalized.

Pope Francis deplores deadly wars, injustice and lies in the world, saying such man-made ills ruined the past year and worked to undermine humanity.

In recent months, the pontiff has repeatedly reminded that rising nationalism presents a serious threat to Western societies. Last year, the Pope appeared to warn against the dangers posed by anti-immigrant parties across Europe and elsewhere.

"Extremist and populist groups are finding fertile ground in many countries," he said in late October last year. "They make protest the heart of their political message, without offering the alternative of a constructive political project."

Early last year, Pope Francis also warned against the rise of populist leaders like Adolf Hitler. He made the comments to Spanish newspaper El Pais as Donald Trump was being sworn in as the 45th President of the United States.

The head of the Catholic Church condemned the use of walls and barbed wire to keep out foreigners. During Trump’s presidential campaign, the Pope described Trump as “not Christian” for wanting to build a wall on the Mexican border.