Palestine to apply for full UN membership early next year 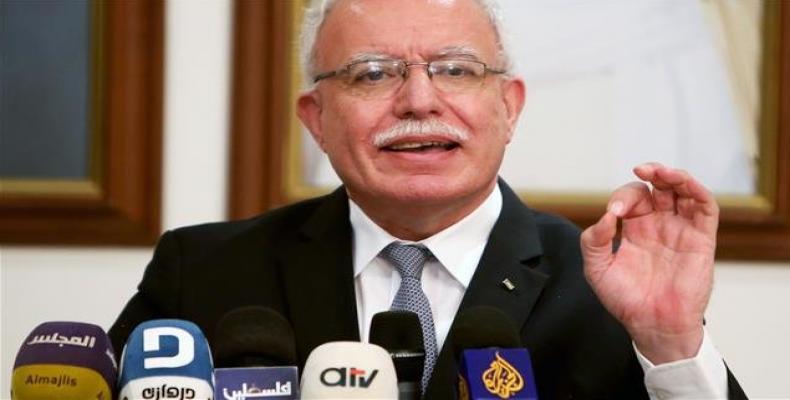 Speaking in an interview with Ramallah-based Voice of Palestine radio station, Maliki said he would file the application upon Palestinian President Mahmoud Abbas' instructions in a bid to upgrade Palestine's status from an observer state to a full-member state to the UN Security Council (UNSC), when he visits New York next month.

Palestinians need support from at least nine of the UNSC's 15 member states to secure full state membership.  Maliki further noted that he would demand the implementation of the UN Security Council Resolution 2334, and ask the International Criminal Court (ICC) to open an official inquiry into Israeli settlement construction.

Less than a month before U.S. President Donald Trump took office, the UNSC adopted Resolution 2334, calling on Israel to “immediately and completely cease all settlement activities in the occupied Palestinian territories, including East Jerusalem.”

About 600,000 Israelis live in over 230 illegal settlements built since the 1967 Israeli occupation of the Palestinian territories of the West Bank and East Jerusalem.

Palestinians want the West Bank as part of a future independent Palestinian state with East Jerusalem as its capital.

The last round of Israeli-Palestinian talks collapsed in 2014. Among the major sticking points in those negotiations was Israel’s continued settlement expansion on Palestinian territories.

Trump backtracked on Washington’s support for a “two-state solution” earlier this year, saying he would support any solution favored by both sides.

“Looking at two-state or one-state, I like the one that both parties like. I’m very happy with the one both parties like. I can live with either one,” the US president said during a joint press conference with Israeli Prime Minister Benjamin Netanyahu in Washington on February 15.