U.S. secretary of state says Washington will work with Israel against Syria and Iran 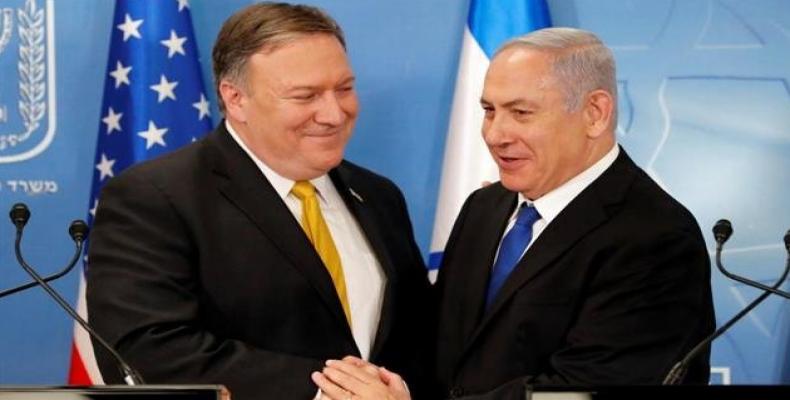 Brasilia, January 4 (RHC)-- U.S. Secretary of State Mike Pompeo has said that Washington will continue to work closely with Israel over Syria and Iran, despite President Donald Trump’s announcement of withdrawing American troops from Syria.

Pompeo made the remarks as he met with Israeli Prime Minister Benjamin Netanyahu in the Brazilian capital Brasilia.  The top U.S. diplomat said President Trump’s announcement of pulling out troops from Syria “in no way changes anything that this administration is working on alongside Israel.”

“The counter-ISIS (Daesh) campaign continues, our efforts to counter Iranian aggression continue and our commitment to Middle East stability and the protection of Israel continues in the same way it did before that decision was made,” he said.

Trump announced his decision to withdraw the U.S. troops from Syria on December 19, saying that Daesh had been defeated.  The next day Trump proclaimed that US troops cannot stay in Syria "forever.”

Several senators on both sides of the aisle have accused Trump of making a hasty decision, with one administration official saying "the President's decision-by-tweet will recklessly put American and allied lives in danger around the world."

But several others, like Republican Senator Rand Paul and former congressman Dr. Ron Paul, have defended Trump's decision to withdraw the American troops in Syria, with Dr. Paul saying that the United States needs to "have a clean cut" with military involvement in the Middle East.

While speaking at the press conference in Brasilia on Tuesday, Netanyahu said: “We’re going to be discussing our intense cooperation between Israel and the United States which will also deal with the questions following the decision, the American decision, on Syria and how to intensify even further our intelligence and operational cooperation in Syria and elsewhere to block Iranian aggression in the Middle East.”

He added that Israel was very appreciative of the “strong ... unequivocal support” Pompeo gave to Israel’s “efforts at self-defense against Syria” in the past few days.

The United States, Israel, France, Britain and their regional allies such as Saudi Arabia, the United Arab Emirates, Turkey and Qatar have been sponsoring terrorists in Syria since 2011 which has left the Arab country in ruins.

America’s most foreign allies in the war against Syria, particularly Israel and Saudi Arabia, are opposing Trump’s plans of withdrawing U.S. troops from Syria.