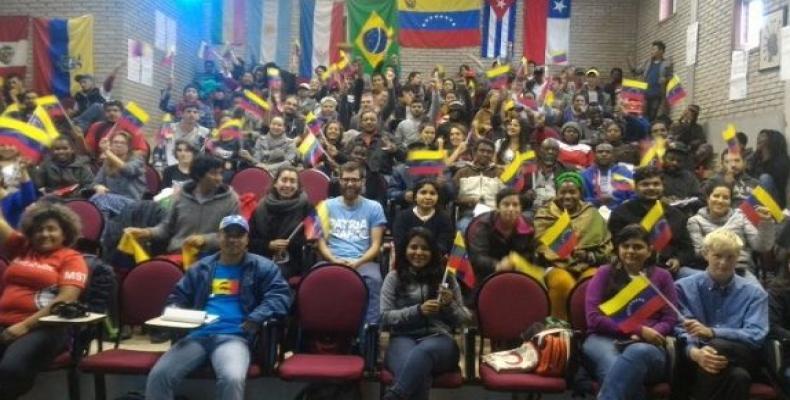 Brasilia, Feb 24 (PL) Brazilian solidarity groups, participating in the carnival groups in Brasilia, cried out for a culture in favor of peaceful coexistence and non-intervention in Venezuela, threatened by internal and external reactionary forces.

Carrying flags of the neighboring country and posters with the phrase 'If they attack Venezuela, they attack us all,' Venezuelan workers, professionals, intellectuals and diplomatic representatives in Brazil, marched through one of the streets of Asa Norte, a neighborhood of the administrative region of Brasilia, under the cry: 'Manos Fuera de Venezuela' (Hands-off Venezuela).

Although we are in a period of festivities, we denounce the distressing situation facing the Venezuelan people, gravely threatened by an imminent imperial invasion, Brazilian professor Clara Oliveira told Prensa Latina.

Amidst the bustle of trumpets, Oliveira commented that Venezuela is going through 'a path of transformation, with its own characteristics, but the danger of direct intervention by the United States and submissive governments of the region hangs over that country.'

She described as a show and farce the humanitarian aid, which, like a Trojan Horse, wants to enter Venezuela and then justify a military invasion.

The educator lamented the position of the Government of Jair Bolsonaro who joined the provocation, as a subordinate to the interventionist policies of Washington, and allowed the arrival of two trucks with food and medicine to the border with Venezuela, under extreme tension.

The Brazilian teacher lamented the position of the Government of Jair Bolsonaro who joined the provocation, as a subordinate to the interventionist policies of Washington, and allowed the arrival of two trucks with food and medicine to the border with Venezuela, under extreme tension.

In that same corner, Doctor Danilo Sabino, who studied in Cuba, said that 'given the critical and tense situation in Venezuela, we decided to take advantage of the carnival to make a call for peace and dialogue, against foreign intervention, with joy and awareness of the serious moment. '

He said that it is 'with the presence of anyone who can carry a flag, a poster, a fantasy that places the theme of peace in Latin America in the middle of carnival.'

Since Thursday, the demarcation between the two countries remains closed after an order by Venezuelan President Nicolás Maduro, in the face of threats and provocations from the United States and its allies that invoke humanitarian relief as a pretext to attack Venezuela.

The action of Brazil to facilitate the action of the United States against Maduro's government 'denies the country's own history, its diplomacy, of not getting involved in conflicts and of respecting the sovereignty of its neighbors,' said former Brazilian Foreign Minister Celso Amorim.