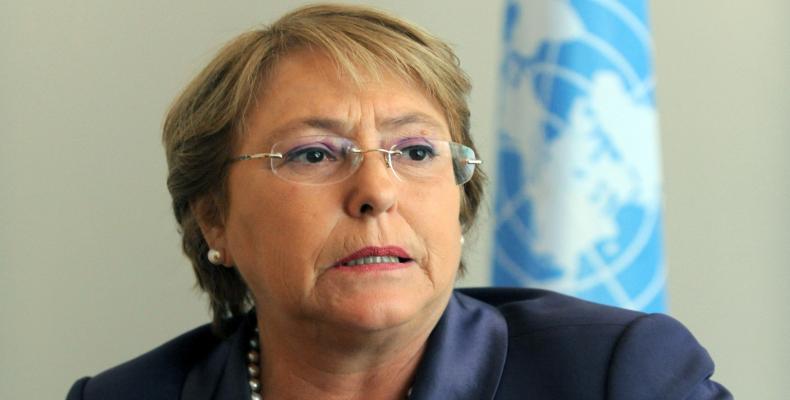 New York, March 11 (RHC)-- According to a report by the U.S. magazine Foreign Policy, a memo from former UN ambassador Nikki Haley reveals that Washington opposed the appointment of former Chilean President Michelle Bachelet as the United Nations High Commissioner for Human Rights, citing her "troubling" political views on Israel, her comments in support of abortion, and her warm relationships with progressive leaders in Latin America, according to a recent report by the Foreign Policy magazine.

This came after the Donald Trump administration withdrew from the Human Rights Council in June, citing what it considered a bias against Israel and a track record of extending membership to states with human rights violation records.

The confidential September 6th memo reviewed by Foreign Policy magazine, which Nikki Haley, who was still an ambassador at the time, wrote to U.N. Secretary-General António Guterres, details both U.S. and Israeli objections to Bachelet’s appointment and how her selection was handled.

“Haley complained that questions Washington had raised repeatedly about Bachelet’s political qualifications for the job were ignored,” Colum Lynch wrote for FP. “While the memo does not say that the United States explicitly called on the U.N. to block Bachelet’s appointment, it makes clear that Washington firmly opposed it and tried to stall the hiring process until it could make its case.”

Bachelet’s inaugural address criticized Israel and the United States, as well as Saudi Arabia, and non-U.S. allied countries such as Iran, China, Nicaragua and Venezuela.

In a statement September 12th, before Haley announced her resignation the following month, she said that High Commissioner Bachelet “continued the failures of the past, further validating the U.S. decision to withdraw, when she criticized both Israel and the United States while ignoring some of the worst human rights violators in the world,”

Mari Stull, senior advisor to U.S. assistant secretary of state for international organization affairs Kevin Moley, raised concern in July over Bachelet’s role in legalizing abortion in Chile, a conservative Catholic nation, saying she “might have been a credible global figure if she hadn’t decided to become the world’s leading advocate for abortion,” a diplomatic source told Foreign Policy.

The secret memo indicates that some of the objections by Stull included "photos of Bachelet side by side with Latin American dictators,” in an apparent reference to former and current leftist and progressive leaders in the region.

Bachelet ended her second four-year term as President of Chile last March, having previously held office from 2006 to 2010 as the first woman elected to Chile’s highest office. After her first term, she joined the United Nations as the first Executive Director of the newly established United Nations Entity for Gender Equality and the Empowerment of Women in 2010 before returning to the presidency of Chile.

The U.N. reveres Bachelet as “a long-time human rights champion and ground-breaking leader,” who, as a pediatrician, began her career in government as an adviser in the Ministry of Health, before quickly rising to become the first woman to lead Chile’s Health Ministry in 2000 and then its Defense Ministry in 2002.

She became involved in Chilean human rights activism in the early 1970s. She and her parents had been political prisoners under the dictatorship of Augusto Pinochet -- her father, who was a general in the air force, was tortured and died in prison. After their release, Bachelet and her mother lived for several years in exile.

She returned to Chile in 1979, finished school, and became a pediatrician and public health advocate. Incidentally, Bachelet also studied military strategy at Chile’s National Academy of Strategy and Policy and at the Inter-American Defense College in the United States.