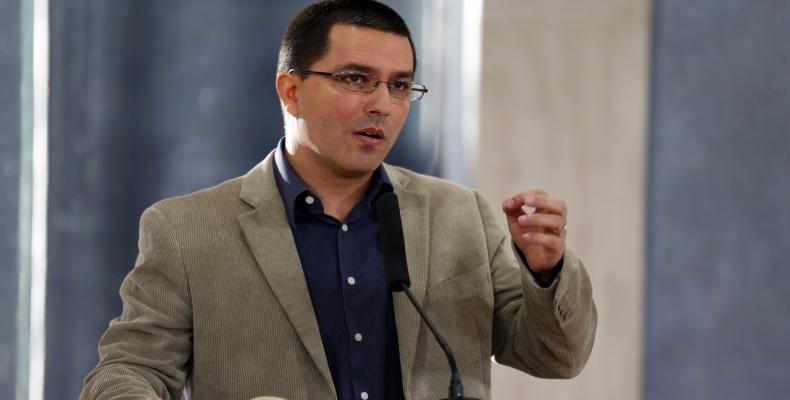 United Nations, April 26 (RHC)-- Venezuelan Foreign Minister Jorge Arreaza has denounced the unilateral sanctions imposed by the United States, saying that they are not against officials, but against the people.

At the United Nations on Thursday, Venezuela's top diplomat said that he wants the world to understand the consequences of the unilateral blockade of the U.S. government on Venezuela, "consequences that have taken the lives of thousands."

Arreaza said that right now, the struggles to control the South American nation’s natural wealth have deepened, particularly "against the social model of the Bolivarian Revolution developed by the Hugo Chavez along with the people."

"The wealth of the Bolivarian Republic of Venezuela has been affected in a substantial way, closing bank accounts and withholding money," the foreign minister explained.  In addition, he reported that there are some 5 billion euros belonging to Venezuela that have been blocked at different banks in European countries, including Citibank, Novo Bank, Bank of England, North Capital Bank -- all joining U.S. measures designed to harm the country.

The Venezuelan diplomat also stated that several state accounts have been closed and they have been denied the possibility of seeking credits, which would be used to buy food, supplies and medicine needed by the people.

Arreaza said that in the coming days, President Nicolas Maduro will speak to the issue of the effects of the blockade imposed by U.S. President Donald Trump.  Talking about the unilateral and illegal sanctions imposed by the U.S. government, the foreign minister affirmed that Venezuela is not a threat to any country in the region, much less to the powerful United States.  "The sanctions are not against officials — they are against the people, against our economy," he reiterated.  He also said that his country's bilateral relations with Russia, especially military alliances, do not represent a threat to U.S. security.

The Venezuelan foreign minister also denounced that there are currently 26 patients in Italy awaiting bone marrow transplants who are about to die as a result of the blockade imposed by the United States.  The diplomat explained that these people -- many of them children and seniors -- had their treatment and expenses paid for by the subsidiary of the Venezuelan state oil company Pdvsa in the U.S., CITGO, but when that was seized by the U.S. government, they could not cover their medical expenses.