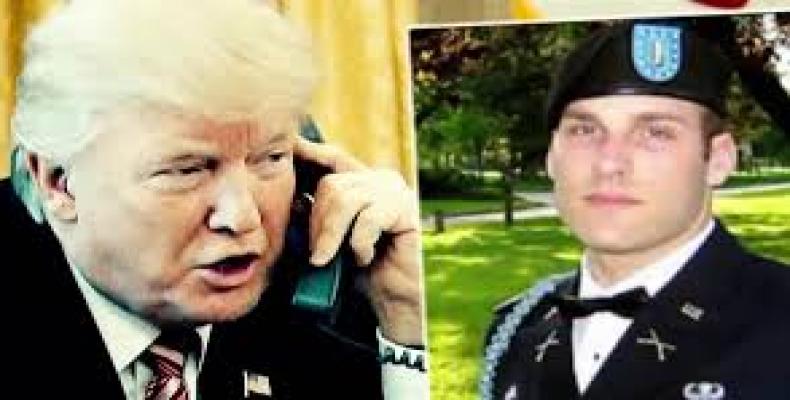 Washington, May 8 (RHC)-- U.S. President Donald Trump has granted a full pardon to a former army lieutenant who was convicted of killing an unarmed Iraqi man.

In 2009, Michael Behenna was convicted for “unpremeditated murder in a combat zone” of Ali Mansur during an unauthorized interrogation.  Mansur was detained by U.S. soldiers after Behenna’s convoy was attacked in Baghdad.  Initially, he was accused of being linked to al-Qaida.  A military interrogation did not find any evidence to link Masur to the explosion which cost Behenna two friends.

Later, the soldier was ordered to deliver Mansur back to his village.  Instead, he took the man in a secluded area to interrogate him.  Mansur was stripped naked and shot by Behenna in the chest and head.  He claimed self-defense and said that Mansur had thrown a piece of concrete at him and reached for his gun.

A military court found him guilty and gave him a sentence of 25 years in prison. His sentence was later reduced to 15 years. However, he was released on parole in 2014.  The White House said that Behenna “has attracted broad support from the military, Oklahoma elected officials, and the public.”

“Further, while serving his sentence,” it continued, “Mr. Behenna was a model prisoner. In light of these facts, Mr. Behenna is entirely deserving of this Grant of Executive Clemency.”

The Oklahoma attorney general said that Behenna did not deserve  “the label ‘murderer,’ or the lifelong punishment and stigma that come with being a federal criminal.”

After killing Mansur, the former soldier told his companions that “he would do it again, and did not feel bad about it because he just lost two guys” according to a military court filing.