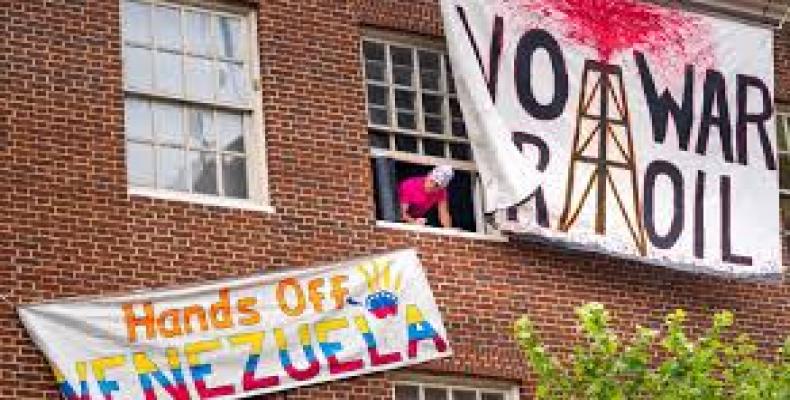 Last night, the Potomac Electric Power Company (PEPCO), assisted by the U.S. Secret Service, cut off electricity to the activists lawfully residing inside the Venezuelan Embassy in Washington, D.C, creating a dangerous emergency situation. The Secret Service was undoubtedly carrying out an order from Trump's State Department. This was done despite utility bills being fully paid by the owners of the building, which is the legitimate government of Venezuela, and despite the fact that  the activists inside are invited guests of the Venezuelan government.

Activists have been residing inside the Venezuelan Embassy since mid-April to protect it from takeover by opposition forces as part of the U.S. orchestrated coup. Organized by CODEPINK, Answer Coalition, and Popular Resistance, they formed the Embassy Protection Collective. They are demanding that the electricity and water be turned back on, and that food and medicines be allowed inside.

Since May 1, the building — with the activists inside — has been besieged by a violent mob of Guaidó supporters, who have been preventing food, medicine, and supplies from entering with support from the U.S. Secret Service. The Secret Service and D.C. police are refusing to make arrests or ensure safety when peaceful activists outside the building are physically assaulted by the Guaidó supporters, or when they try to deliver food into the people inside. The supporters of Guaidó's coup have repeatedly threatened activists outside using extreme homophobic, racist, and misogynistic slurs.

At 1pm today the activists outside and inside the building will hold a press conference to address the situation and demand that U.S. authorities turn utilities back on. Cutting off water and electricity — with utility bills paid in full — is illegal and immoral.
"The United States intelligence services have carried out attacks on Venezuela's electrical grid in an effort to support an illegal regime change operation. By shutting off the electricity to the Venezuelan Embassy, they are resorting to ironically similar methods. This coup is failing. The people of the United States and around the world are rejecting this brazen act of lawlessness by the Trump administration," said Brian Becker, National Director of the ANSWER Coalition.

CODEPINK said in a statement: "We are appalled at the administration’s violations of human rights  — denying access to food, water, and electricity, allowing violent physical assaults to take place  — and the administration’s violation of the Vienna Conventions on Diplomatic Relations, which stipulate that diplomatic premises are inviolable. Maduro is the UN-recognized president, not Guaidó. Guaidó representatives have no right to the embassy. They cannot provide any diplomatic or consular services because they have no power inside Venezuela."

The Embassy Protection Collective calls on the Trump administration to either return the Embassy back into the hands of the elected Maduro government or to turn it over to a third country as a protectorate.
"Trump's State Department has undertaken an unprecedented and dangerous eviceration of the Vienna Convention, overtly violating core Articles 22 and 25. Even in times of war between countries this ratified Convention has preserved diplomatic missions.  The U.S should be prepared for a worldwide cascade effect as its embassies rely on these protections. No one should remain silent and normalize this lawlessness, violence and the extraordinary violations being carried out here at the Venezuela Embassy," said Mara Verheyden Hilliard of the Partnership for Civil Justice Fund, which has been serving as legal counsel for the Collective.