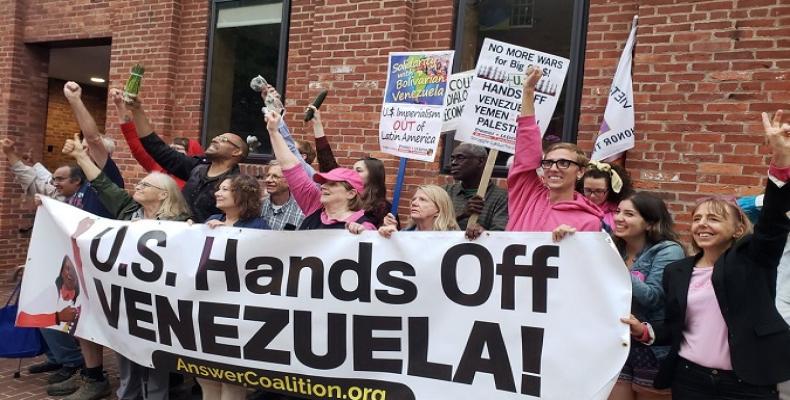 Washington, May 10 (RHC)-- Peace and solidarity activists at the Venezuelan Embassy in the U.S. capital are calling on supporters to come to Washington and join their efforts to prevent the diplomatic mission from falling into the hands of puppet president Juan Guiadó and his people.

According to an alert issued in Washington, DC, the Embassy Protection Collective said: "We urge everyone who can to join daily mobilizations to prevent the illegal seizure of the Venezuelan embassy by supporters of the U.S.-backed coup and protest the siege imposed on embassy protectors by a right-wing mob that has assembled outside.  With the full cooperation of the Secret Service, the coup supporters have blockaded food and other essentials needed by members of the Embassy Protection Collective who are living inside the building as invited guests of the legitimate government of Venezuela."

Organizers of the action said that the supporters of Guiadó have carried out numerous acts of physical violence as well as hurling racist, sexist and anti-LGBTQ abuse.  But the peace activists say this has only strengthened the resolve of the embassy protectors.

The Embassy Protection Collective affirms that what is most needed now is "a show of force on a daily basis by all those who believe in Venezuela's right to determine its own destiny and oppose the U.S. war machine."

In a statement issued from Washington, the ANSWER Coalition (Act Now to Stop War and End Racism) notes that the action has been "a fantastic example of cooperation with support from numerous organizations and individuals who have come together in opposition to the Trump administration's brazen efforts to violate international law, impose crippling economic sanctions, topple an internationally-recognized sovereign government and drag the United States into another war -- this time in Latin America."