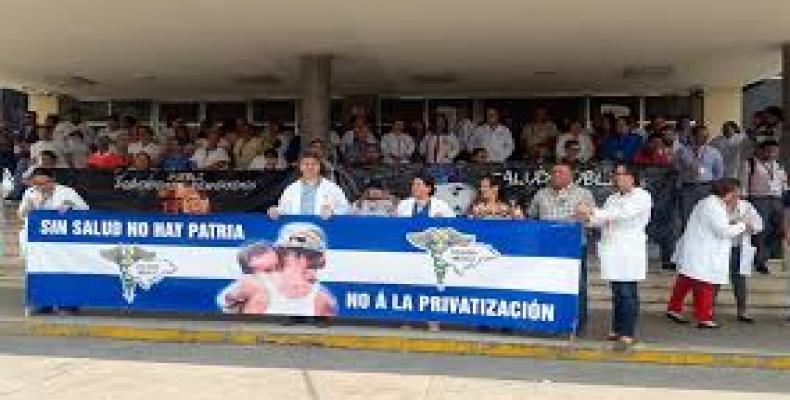 Tegucigalpa, May 20 (RHC)-- Honduran medical professionals and educators continue to defend their rights as the joint strike reaches goes into its second week. Public schools and medical institutions have suspended all activities to demand the state repeal laws appointing various special commissions intended to privatize national healthcare and educational systems.

In an interview with Radio Progreso, Edwin Hernandez, the president of the College of Pedagogues of Honduras (Colpedagogosh), explained that privatizing these sectors is a way for the state to help their “business friends.”

“They gave them the roads and the airports, and they already subrogated some health services. That is the process they are pushing. Following neoliberal policies, they are delivering everything that can supposedly be profitable for their business friends."

Over the last decade, health and education sectors have been subject to cuts, from salaries to employment to investment, Hernandez said. Any teachers or health professionals that rose up to complain against the ruling government party lost their jobs.

The union leader said: “After 10 years of real repression by the party in the government, we have been relegated by fear.”

“But like all totalitarian regimes … they stole everything except fear. As we do not have anything left to lose, we are on the streets now. We do not care if they are going to repress us, if they take away our work, or if they will reduce our salaries."