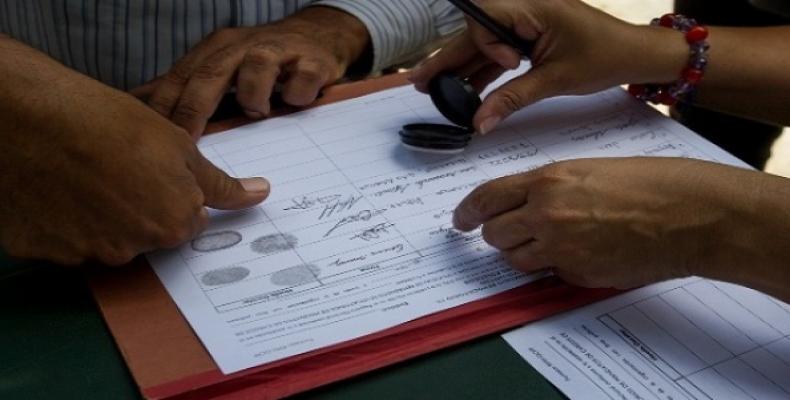 Caracas, August 12 (RHC)-- Venezuela is mobilizing to collect signatures for a petition demanding an end to the U.S. blockade -- calling on Washington to lift the unilateral measure which damages Venezuela’s ability to buy food and medicine from abroad.

A total of 13 million people are expected to sign the petition, according to the government, and it follows large #NoMoreTrump rallies that were held around the country and internationally on Saturday.

In a number of Venezuelan cities, tables have been organized in public squares to collect signatures for the petition that will be sent to United Nations Secretary-General Antonio Guterres.  The signatures will also be collected in a number of countries around the world.

The campaign was convened in recent days by President Nicolas Maduro, after Trump signed an executive order on August 5th that officially seizes Venezuelan state assets in the United States.  This includes the multibillion-dollar CITGO company, a subsidiary of Venezuela’s state-owned oil company PDVSA.

The ongoing blockade on Venezuela makes it difficult and often impossible for Venezuela to pay for vital supplies of food and medicine from abroad as foreign banks refuse to process payments.

President Nicolas Maduro and his wife Cilia Flores were the first to sign the petition at the rally in Caracas on Saturday.  He said at the rally: “This is a fight for peace against the sanctions imposed by the United States, and the power of the dollar.  For 20 years Venezuela has had a popular government.  Today, we Venezuelans have dignity and are spiritually united."