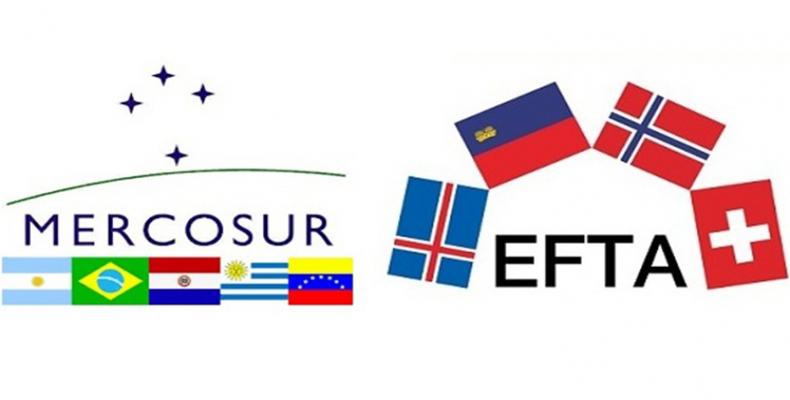 Brasilia, August 24 (RHC)-- In an historic signing, countries within Mercosur and the European Free Trade Association (EFTA) came to a free trade agreement Friday after 23 years of negotiations.

Brazilian President Jair Bolsonaro called the document, "another great victory for our commercial opening and diplomacy," who currently presides over the Mercosur bloc, which includes Brazil, Argentina, Uruguay and Paraguay.  The head of state, who threatened last year to leave the bloc, did not immediately specify terms of the accord.

"Today, we concluded negotiations of the free trade agreement between Mercosur and EFTA which has a GDP of 1.1 billion dollars and is the ninth largest commercial actor in the world," Bolsonaro later tweeted. EFTA comprises Switzerland, Norway, Iceland and Liechtenstein.

EFTA countries annually import goods as much as $530 billion and export nearly $630 billion. Argentina’s Secretary of International Economic Relations Horacio Reyser told local media: "This agreement is key for Mercosur and Argentina in their process of international insertion and for strengthening the competitiveness of our economies.”

After a lull in negotiations over the trade accord by previous Argentine governments, President Mauricio Macri’s foreign minister has been pushing for the pact.  Foreign Minister Jorge Faurie said last June that the Mercosur-EFTA agreement would "expand (Argentina’s) economic space."

During a Friday press conference European Commission Spokeswoman, Natasha Bertaud said: "We can say that the (European) Commission is deeply worried. The Amazon is the world's largest rainforest and contains one tenth of the world's species.  That's why we ... welcome (French) President (Emmanuel) Macron's intention to discuss this matter at the G-7 meeting. The sense of emergency is indeed warranted.."

The agreement has also been criticized by unions in South America that say it will be the “death” of their industries in the region that will be flooded with European products. The Central Coordinator of Trade Union of the Southern Cone, which includes 20 trade union centers in Argentina, Brazil, Chile, Bolivia, Paraguay, Uruguay and Venezuela, said that the agreement "is the death sentence of our industries and much of our decent work and quality of employment."

They say the agreement will promote agricultural exports to Europe by Mercosur member countries, while industrial and value-added products will freely enter South America.

Mercosur countries currently export about US$3 billion each year to EFTA nations.

The Brazilian Foreign Minister, Ernesto Araujo says his nation is currently negotiating commercial agreements with South Korea, Singapore and Canada, according to EFE.