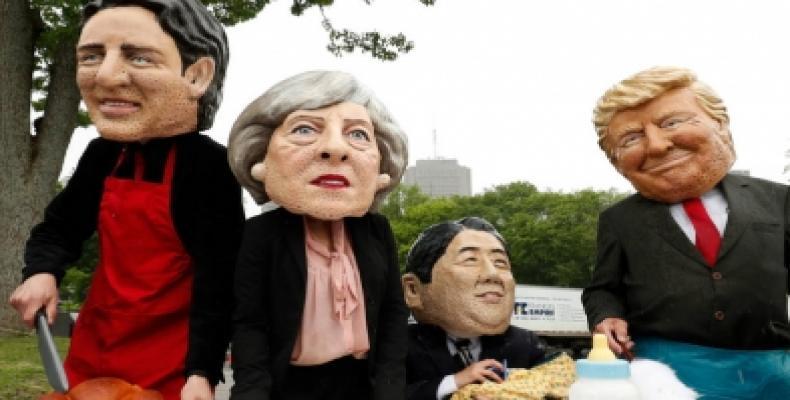 Paris, August 26 (RHC)-- U.S. President Donald Trump was absent from Monday’s meeting on climate change at the G-7 summit in France, missing talks on how to deal with the Amazon rainforest fires as well as new ways to cut carbon emissions.

"The President had scheduled meetings and bilaterals with Germany and India, so a senior member of the Administration attended instead," White House press secretary Stephanie Grisham said Monday in a statement.  French President Emmanuel Macron confirmed Trump had not personally attended the climate session but that officials from his administration were present.

Macron had placed the climate emergency and protection of biodiversity at the heart of the summit, even before the Amazon rainforest fires.

At the end of the meeting, other G7 leaders in attendance pledged $20 million to help fight the raging fires in the Amazon and to launch a long-term initiative to protect the region.

The G-7 club -- made up of Britain, Canada, France, Germany, Italy, Japan and the United States -- has also agreed to support a medium-term reforestation plan which will be unveiled at the UN in September.

Trump, a longtime skeptic of global warming, has suggested that climate change was a hoax perpetrated by China.  He shocked the global community when he withdrew the U.S. from the landmark Paris climate agreement in 2017, shortly after he took office.

United Nations Secretary General told reporters after leaving the climate meeting that he hopes the American society and the US business community, as well as local officials, will take action on climate change.