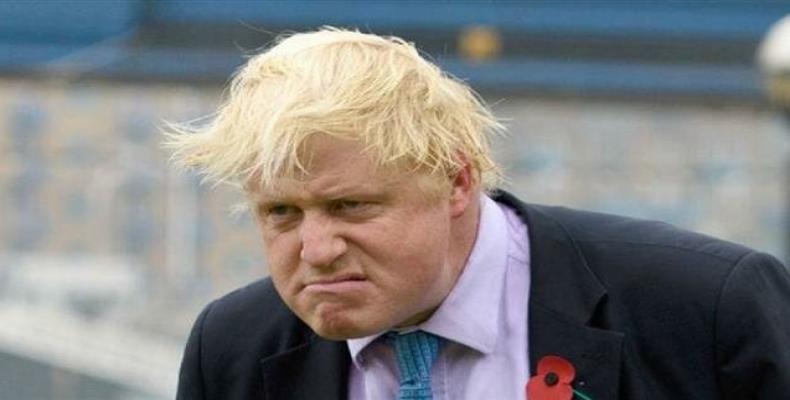 On Wednesday, Johnson moved to limit parliament's opportunity to stop Brexit by cutting the amount of time it sits between now and EU exit day on October 31, infuriating opponents who accused him of leading a "very British coup."

In his most controversial move yet to take the country out of the European Union with or without a divorce deal, Johnson said he would set October 14th for the Queen's Speech -- the formal state opening of a new session of parliament that is preceded by a suspension of the House of Commons.

That would effectively shut parliament from mid-September for around a month.  Raising the stakes in the constitutional crisis gripping Britain, it could also force Johnson's opponents to up their own game by calling a no-confidence vote in the government, potentially leading to an election.  The news sent the pound down sharply.

Asked in a broadcast interview if he was trying to block politicians from delaying Britain's departure from the EU, Johnson replied: "That is completely untrue, there will be ample time on both sides of that crucial October 17 (European Union leaders') summit, ample time in parliament for MPs (Members of Parliament) to debate the EU, to debate Brexit and all the other issues, ample time."

The move provoked outrage amongst Johnson's opponents and even some senior politicians in his own Conservative Party.  Labour leader Jeremy Corbyn said: "Suspending Parliament is not acceptable, it is not on.  What the prime minister is doing is a smash and grab on our democracy to force through a no deal.”

Corbyn also wrote on Twitter, “Boris Johnson’s attempt to suspend parliament to avoid scrutiny of his plans for a reckless No Deal Brexit is an outrage and a threat to our democracy.”  The first thing Labour will do is “attempt legislation to prevent what [the PM] is doing” followed by a no-confidence vote, Corbyn informed.

"Make no mistake, this is a very British coup," John McDonnell, the second most powerful man in the opposition Labour Party, said. "Whatever one's views on Brexit, once you allow a prime minister to prevent the full and free operation of our democratic institutions you are on a very precarious path."

The U.S. President supported Johnson and said it "would be very hard" for Corbyn to seek a no-confidence vote against the prime minister as “Boris is exactly what the UK has been looking for.”

With just 65 days until exit day, parliamentarians are battling to prevent the prime minister from steering the country out of the EU without a transition deal, pitching one of Europe's most stable countries into uncharted territory.

On Tuesday, the leaders of Britain's opposition parties had agreed to seek to use parliamentary procedure to force Johnson to ask Brussels for a delay to Brexit beyond Oct. 31. But with the prime minister finally showing his hand, they may try to bring him down instead.

With Johnson holding a working majority of just one seat in the 650-seat parliament, members of his Conservative Party who oppose a no-deal Brexit will have to decide where their loyalties lie.

"I think (a no-confidence vote) is more likely, because if it is impossible to prevent prorogation, then I think it's going to be very difficult for people like myself to keep confidence in the government," pro-EU Conservative lawmaker Dominic Grieve said, using an alternative term for the suspension of parliament.

Netizens took to Twitter against this decision with the hashtag #StopTheCoup which is trending on the social media.
​​​​​​​
While suspending parliament ahead of a Queen's Speech is the historical norm in Britain, the decision to limit parliamentary scrutiny weeks before the country's most contentious policy decision in decades prompted an immediate outcry.

Parliament's speaker John Bercow, a powerful figure who has shown a willingness to break procedural precedents in order to ensure lawmakers can debate Brexit fully, said it was "blindingly obvious" the move was designed to restrict debate.

"Shutting down Parliament would be an offence against the democratic process and the rights of Parliamentarians as the people’s elected representatives," Bercow, who voted to remain in the EU in 2016, said in a statement.

Philip Hammond, a member of Johnson's party and former finance minister who has pledged to block a disorderly Brexit, said it would be a constitutional outrage if parliament cannot hold the government to account.

Johnson argued, however, that the move was designed to allow his government to press on with its domestic agenda.  Typically, a Queen's Speech is held every year.  Johnson is a new prime minister, who took over from Theresa May in July, and so would be expected to have his own legislative priorities.

Parliament returns from its summer break on Sept. 3 and had been expected to sit for two weeks before breaking up again to allow political parties to hold their annual conferences. Typically it begins sitting again in early October.

The Queen's Speech is the formal state opening of a new session of parliament at which Queen Elizabeth, 93 years-old, reads a speech prepared by the government.  A Queen's Speech on October 14th would delay parliament's return and leave lawmakers with just over two weeks until Britain is due to leave the EU on October 31st.  Those lawmakers opposed to a no-deal Brexit will likely have to make their response next week if they are to avoid running out of time.